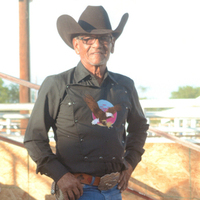 A Memorial Service will be held at the Fort Sumner Methodist Church on Saturday, January 15, 2022 at 2 p.m. with Mr. Tom Bob Wilton officiating. Benjamin,75, passed away on December 25, 2021 in Pauls Valley, Oklahoma surrounded by family after a courageous battle with cancer. Benjamin was born on November 26, 1946 to the home of Abundio and Leandra Madrid in Los Fresnos, Mexico. He was the youngest of four children. Benjamin made his home in Fort Sumner where he worked on several area ranches over the years, doing what he loved. He could always be counted on to show up and make a hand wherever he was needed. He covered countless miles in De Baca County and worked many calves while enjoying the company of good friends. He also enjoyed working on his tractor and spending time with family. Benjamin is preceded in death by a son, Benjamin Jr Madrid and a grandson Jesse "Jr" Gomez. Benjamin is survived by his wife Maria Gomez of Fort Sumner, five sons: Carlos (Keri) Gomez, Albert (Carey) Arias, Benny Madrid, Abundio Madrid, Chump (Kreston) Madrid, one daughter: Oralia (Alfonso) Madrid, 13 grandchildren and 4 great grandchildren. Also surviving are his brother and two sisters along with many nieces, nephews, and friends. In lieu of flowers the family requests that memorial contributions be made to American Cancer Society. Arrangements are under the direction of Chavez Funeral Home, 830 N. Fifth Street, Fort Sumner, New Mexico. (575) 355-2311.
To order memorial trees or send flowers to the family in memory of Benjamin "Benny" Madrid, please visit our flower store.