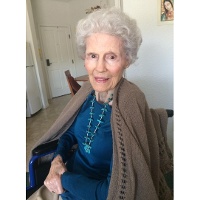 Beverly A. Cooley-Sanchez, age 86, of Santa Rosa, NM, passed away peacefully on the morning of Wednesday, July 17, 2019 in Las Cruces, NM where she had been a resident at the Village of Northrise Assisted Living Facility.  Beverly was born in Fowler, IN on April 19, 1933 to James F. Cooley and Lorena A. Besse. She graduated from Oxford High School, Oxford, IN and later attended Phoenix College in Phoenix, AZ. She also attended John Robert Powers School of Modeling and was Treasurer of the Fashionaires of Arizona Modeling Guild. It was in Phoenix where Beverly met her future husband, Canuto Sanchez, Jr., at a church social. They were married on July 8, 1959 at Our Lady of Fatima Catholic Church in Albuquerque, NM.  Later in 1959, Beverly and Canuto “Newt” moved to Sao Paulo, Brazil where Newt was employed by International Packers LTD. Their three eldest children were all born in Sao Paulo; Kelly in 1960, and Tracy and Curt (twins) in 1962. The family subsequently maintained residence in Buenos Aires, Argentina, and in Santiago, Chile before moving back to Santa Rosa, NM in late 1964.  Beverly and Newt were pioneers in the commercial development of the East end of Santa Rosa, NM along Route 66. In 1966, they purchased and began operations of the Plains Motel. Later that same year, they built and began operations of “Newt’s American Service” gas station next door to the Plains Motel. Their daughter, Darby, was born in Santa Rosa in 1967, as were their younger sons, Miles and Britt (second set of twins), in 1970. In 1978, Beverly and Newt opened the Dairy Queen of Santa Rosa. For several years, all three businesses operated simultaneously. It was the Dairy Queen that most current residents of Santa Rosa remember when associated with Beverly. She was owner/manager of the staff there for 29 years, employing countless residents of Santa Rosa. She gave many young people their first job and so many of them recount Beverly’s kind words, mentorship, and proper start in their eventual adult careers.  Beverly was deeply devoted to her Catholic faith. Newt and Beverly were extremely fortunate to celebrate their 60th wedding anniversary on July 8, 2019.  Beverly was preceded in death by her parents, James and Lorena Cooley of Oxford, IN; her brothers, Eldon Cooley of Oxford, IN, and Marvin Cooley of Goodland IN; and her eldest sister, Venitta Camden of St. Louis, MO.  Beverly is survived by her husband, Newt Sanchez, of Santa Rosa, NM, and her sisters: Iva Gene Brouillette of Fowler, IN; Eunice Cyr of Fowler, IN; and Bernice Oneal of Oxford, IN. Beverly is also survived by all of her children: daughters Kelly Hurt of Animas, NM; Tracy Lucero of Las Cruces, NM; and Darby Sanchez of Las Cruces, NM; and her sons, Curt Sanchez of Longmont, CO; Miles Sanchez of Phoenix, AZ; and Britt Sanchez of Scottsdale, AZ; as well as 10 grandchildren. Recitation of the Most Holy Rosary will be Wednesday, July 24, 2019 at 10:00 A.M. at Saint Rosa of Lima Catholic Church in Santa Rosa, followed by the Mass of Christian Burial.  Interment will follow in the family plot at Saint Rose of Lima Cemetery, with Father Sotero Sena officiating the services.  Pallbearers will be Curt Sanchez, Miles Sanchez, Britt Sanchez, Ryan Gonzales, Remington Hurt, Lawrence Hurt, Felipe L. Sanchez, Phillip L. Sanchez III, and Roger Brouillette. In lieu of flowers, it is Beverly’s wishes that donations go to her favorite charity: Catholic Daughters of America, Santa Rosa de Lima Court 2276, C/O Martha Hoehne, P.O. Box 183, Vaughn, NM 88353. On behalf of the Sanchez family, we humbly thank you for assisting the needy families of Guadalupe County, NM.  All arrangements are entrusted to Chavez Funeral Home, 923 S. Third St., Santa Rosa, NM  88435; 575-472-3369.  To Place
To order memorial trees or send flowers to the family in memory of Beverly Ann Sanchez, please visit our flower store.