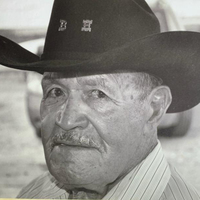 It is with great sadness that we announce the passing of a beloved Guadalupe County legend Blas Felipe Hoehne.  Blas was born in Pintada, NM on February 1, 1928 and passed away peacefully in his sleep on January 20, 2020 after a long illness.   Blas or “Blassie” as friends and family knew him by was born in Pintada, NM to the home of Blas Hoehne Sr. and Maria Magdalena Pacheco-Hoehne.  This was during the Great Depression, and the family lived through some very hard times.  Blas and his siblings had to work at a young age in order to help the family survive. In 1937 when Blas was 9 years old he left home to work for Jim Driggers on the Bar Y Ranch.  Later he moved to Plainview, TX where he worked picking cotton and stacking broomcorn for a couple of years.    Blas joined his brother in Winslow, AZ where he worked for the Atchison, Topeka and Santa Fe Railway.  During this time Blas was drafted and became part of the “Greatest Generation” where he served proudly in World War II.  He was assigned to the U.S. Army 726th Engineers Heavy Shop Company in Yokohama, Japan where he became a paratrooper.  During his years of service Blas was awarded the World War II Victory Medal, and Army of Occupation Medal.    Following his years of service, Blas returned to New Mexico where he married Selena Espinosa.  He returned to Arizona where he joined the William Clemans Cattle Company that was owned by Gene Autry.  A couple of his fondest memories were watching over Gene Autry’s horse “Champion”, and meeting Fox Hastings the “most famous cowgirl bulldogger” of the 1930’s.   Blas relocated to Albuquerque, NM in 1954 where he worked 14 years for Wade Lumber Co.  Upon the death of his father Blas Hoehne Sr. in 1963 he returned to Colonias, NM to care for his mother Maria Magdalena Pacheco-Hoehne.  At this time Blas hired on with Charles Sanford Construction Co. from Santa Rosa, NM where he helped build many schools, commercial buildings and homes throughout the state.   Blas eventually began his own construction business, serving many families in the Guadalupe County community where he built a lasting legacy and honed his skilled craftsmanship, and strong work ethic.  He also ran his own successful ranching business on the family ranch in Pintada, NM.     Blas was an avid outdoorsman and cowboy that loved to hunt and ride his two favorite horses Diamond and Amigo.  He also enjoyed many great times in his life, and was blessed with many friends.  From the “funciones” in Pintada, NM to the dances at the Frontier Bar, he was always the life of the party.  He often addressed friends with his trademark term of endearment “joven”.   Blas is preceded in death by his parents Blas Hoehne Sr. and Maria Magdalena Pacheco-Hoehne, his brother Adolfo Hoehne, sisters Celia Martinez, Victoria Sena, Eliza Romero, Prudencia Saiz and Cecilia Urban.  Survivors include one daughter Nancy Flores (Jake), three sons Phillip Hoehne (Martha), Greg Hoehne (Michele), and Gerald Hoehne (Camilla), Yolanda Donalson-who was like a daughter, Grandchildren William, Jonathan, Jacqueline, Rachel, Kamryn, Kiana, Matthew, Kaitlyn, Savannah, Raegan and Gavin, eleven great grandchildren, many nieces, nephews and other relatives.   Recitation of the Most Holy Rosary will take place on Friday, January 24, 2020 at 6pm and Mass of Christian Burial will be celebrated on Saturday, January 25, 2020 at 10am with both services held at St. Rose of Lima Catholic Church in Santa Rosa, NM, with Father Sotero Sena celebrating the Mass. Burial with Military Honors will take place at Holy Family Cemetery in Pintada, NM with the following serving as pallbearers: Robert Saiz, Rudy Tenorio, Guy Don Cribbs, Beau Cribbs, William Waters, Matthew Hoehne, Larry Nelson and Jonathan Flores.   Honorary Pallbearers are Catarino Romo, Joe and Peggy Chavez, Benny Sisneros, Don and Bonnie Thompson, Ace Thompson, Teresa Cribbs, Christian Sisneros and Blas’ family and friends.   Visitation will be Friday, January 24, 2020 from 1-4pm at Chavez Funeral Home in Santa Rosa.   There will be a luncheon served immediately following the Funeral Mass at the Blue Hole Convention Center in Santa Rosa.  Interment will follow the luncheon at 3pm in Pintada.   All services have been entrusted to Chavez Funeral Home, 923 S. Third St., Santa Rosa, NM  88435.  575-472-3369.  To place an on-line tribute please visit www.chavezfuneralhome.com.
To order memorial trees or send flowers to the family in memory of Blas Hoehne, please visit our flower store.