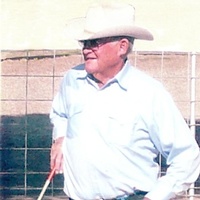 Longtime local rancher Bob West passed away at his home on July 6, 2018.  His family was by his side.  Services will be held at 10:00 am Monday, July 9, at First United Methodist Church in Fort Sumner with Pastor Marvin Pounds officiating.  Burial will follow in the West family plot, Fort Sumner Cemetery.  Pallbearers will be his grandsons (Michael Andreas, Cody, Casey, and Curt West, Brant West, Zane, Lance, and Ryan Fikany, and Clayton Wood).  Honorary bearers will be his granddaughters and great-grandchildren.   Born in the Fort Sumner Valley on September 17, 1928, Bob Damon West was the sixth child of Eurie and Annie Lobley West, joining his siblings J.T., Orval, Pauline, Opal, and Frances, all of whom preceded him in death, as well as a grandson, Austin Wood.  At a very young age, Bob began working on the family farm, growing vegetables, fruit, and other crops. Throughout his life he enjoyed being outdoors, working, hunting, fishing, playing golf, and gardening.  He loved his family, his church, and his community, and he took pride in being one of the Fort Sumner Valley boys.  Bob graduated from Fort Sumner High School in 1946.  He excelled in all sports and holds the district record of 23.6 seconds in the 200 yard low hurdles.  He would sometimes laugh about this since the event no longer exists.  When Bob was in high school, there were no school divisions so he and the Foxes played large schools like Albuquerque High.  He and the other boys loved going to practice because it gave them a break from working in the fields, and Bob often said he wished he could go back and play for the Foxes again.  Bob received a football and track scholarship from the University of Denver with the help of his coach, Jim Burke, whom he always appreciated for helping to make his education possible.  Bob married his high school sweetheart, Ann Steele, on August 24, 1948.  The couple made their home in Denver and had two children, Cynthia and Mike.  Later they returned to Fort Sumner to work with Ann’s parents, Sam and Frances Steele, on the family ranch.  Their youngest son, Charlie, was born in Fort Sumner.  Bob said he started at the bottom, but Walter Brown gave him a good education in how to be a cowboy.  Sadness came when Ann passed away at the age of 34.  Bob continued caring for his children, and in 1965 he married the former Mary Ann Fallon, adding her two daughters, Cathy and Jane, to the active family. Bob was one of the “Original Gators” at the Salt Cedar Golf Course.  He spent countless hours on civic duties serving as the President of the Ex-Students Association and on various boards including the school board and the county commission.  He was passionate about helping with anything involving kids.  With County Agent Ted Peabody, Bob started the Junior Livestock Sale which he supported for many years.  He served the Fort Sumner United Methodist Church in all offices and sang in the choir for over sixty years.  To the kids, “Grandad” was famous for always finding the best fishing holes and he was never too busy to do things with them, listen to them, or teach them.  He was excited to watch his family participate in sports and other activities.  Many of the state title teams at FSHS had his grandchildren or great-grandchildren competing, including this year’s three state titles by the Foxes and one by the Vixens.   Bob is survived by his wife Mary Ann, daughter Cynthia (Mike) Andreas of Perryton, TX; sons Mike (Stacy) West and Charlie (Vicki) West of Fort Sumner; stepdaughters Cathy Fikany of Las Cruces, NM; and Jane (Beau) Hammond of Isle of Palms, SC. He is also survived by his grandchildren: Michael Andreas of Fort Worth, TX; Cristi Sparks of Fort Sumner; Cody West of Fort Sumner; Casey West of Clovis, NM; Curt West of Taos, NM; Denae West of Hermosa Beach, CA; D’Shawn West of Las Cruces, NM; Brant West of Fort Sumner; Zane Fikany of Las Cruces, NM; Lance Fikany of Hobbs, NM; Ryan Fikany of Ruidoso, NM; and Clayton Wood of Los Angeles, CA.  Great-grandchildren are: Chandra and Jansyn Andreas; Hunter and Hayden Sparks; Kolter, Johni, Creed, and Keeli West; Gavin and Aspyn West; Carly Dirnberger, Kason and CJ Montoya; and Mason and Cooper Fikany.  A host of nieces and nephews also survive. Viewing hours will be Sunday from 10 am to 6 pm at the funeral home. The family requests memorial contributions in Bob's memory to FSHS Foxes and Vixens Sports, P.O. Box 387, Fort Sumner, NM 88119.Services are under the direction of Chavez Funeral Home, 830 N. Fifth Street, Fort Sumner, NM (575) 355-2311.
To order memorial trees or send flowers to the family in memory of Bob West, please visit our flower store.