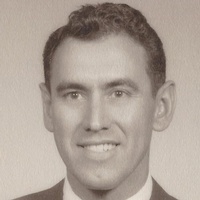 Bonifacio “Boni” M. Garcia, 91, passed away at his home in Albuquerque on February 5, 2019 after complications from a recent fall. He was born on August 16, 1927 into the home of Nicasio Garcia and Rosalia Sanchez in Anton Chico, NM. He was reared and attended schools in Anton Chico and Santa Rosa. In May 1945 after high school graduation, he enlisted in the US Navy and served with the WWII Occupation Forces in the South Pacific and Japan. He participated in Operation Crossroads where he witnessed the detonation of two atomic bombs. It was an experience he never forgot. At the outbreak of the Korean Conflict, while enrolled at Highlands University he was drafted into the US Army despite being an active Naval Reservist. Boni served with the 179th Regiment, 45th Infantry Division in Korea. While immensely proud of his service, his experiences during the war were deeply personal and he rarely spoke on the subject. After his honorable discharge, he attended business school in Albuquerque where he settled in 1953. He worked for Brown-Olds Engineering in the early 1960s photographing the steel welds of the Rio Grande Gorge Bridge while hanging in suspension netting. With this experience, he began a 40+ year career in the mechanical and contracting trades working for Crane Supply Co., its successor, Westburne Supply Inc. and W.M. Carroll & Co. until his retirement in 2002. Proud of his family history, he traced his roots to the early Entrada and the subsequent Reconquista of New Mexico. Boni was named for both of his grandfathers, Bonifacio Garcia and Melquiades Sanchez and counted himself an heir to the Atrisco Land Grant. Married in 1958 to the former, Marcella Lucero, they reared a family of five children. He is survived by his wife, Marcella; sons, Richard (Jody) Garcia, Robert (Carla) Garcia and Gary Garcia; daughters, Carol Garcia and Joan (Mark Wilson); grandchildren, Christian Garcia, Isabella Garcia y Lauer, Joaquin Garcia, Alejandro Garcia, Enrique Garcia, and Quinlan Wilson; a brother, Max Garcia of Albuquerque; and numerous cousins, nieces and nephews. He was preceded in death by his parents; brothers, Nick (Pelagia) Garcia, Jr. and Horacio Garcia; sisters: Gilberta (Antonio) Maestas, Natalia (Christian) Maestas, Mary Jo Hatch and Vickie (Zoilo) Serrano. Funeral services will be celebrated at Our Lady of Fatima Catholic Church, Thursday, March 14, 2019 beginning with a Rosary at 9:00 a.m. and followed by a Requiem Mass at 10:00 a.m. Rite of Committal will be held privately at the Santa Fe National Cemetery. Boni was an organ donor recipient and his survivors wish to thank the donor family for the gift of life bestowed upon him. In addition, we wish to acknowledge the tremendous care and friendship provided by Dr. Dale Erickson. In honor of our father’s life and in lieu of flowers, please consider registering as an organ donor. Que En Paz Descanse.
To order memorial trees or send flowers to the family in memory of Bonifacio M Garcia, please visit our flower store.

Our Lady of Fatima Catholic Church