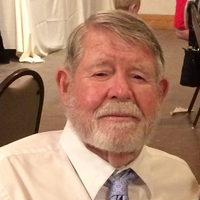 Funeral services will be held at 11:00 am, Saturday, July 9, 2022 in the Chavez Funeral Home Chapel with Dr. Joe Bunce officiating. Interment with military honors and Masonic Services will follow in the family plot, Fort Sumner Cemetery. Pallbearers will include David Edwards, Sam Edwards, Kevin Wedeward, Johnny Reeves, Howard Edwards, Billy Edwards, Robby Edwards, and Denver Edwards. Brown Franklin Edwards, 86 of Cedar Crest, NM passed away at his home Sunday, July 3, 2022. He was born March 1, 1936 in Fort Sumner, NM to the home of Raleigh McCord Edwards and Sophronia “Frona” Hunter Edwards. Brownie was the youngest of 10 children, and grew up in Fort Sumner where he attended school, graduating from Fort Sumner High School in 1955. Following graduation, he attended ENMU for one year before enlisting in the U.S. Navy. He served as a hospital corpsman. He was honorably discharged on November 7, 1960. Brownie also served several years with the New Mexico National Guard-Roswell Unit. Brown married Kathryn “Kate” Barnhill on September 24, 1966 at the Methodist Church in Santa Rosa, NM. Brownie continued his education at NM Highlands University where he received a degree in biology. He taught math and science at Santa Rosa. In 1971 he began working for the NM Environmental Department as a health inspector in Gallup, NM. His job relocated the family to Ruidoso in 1974, to Hobbs in 1980, and finally to Clovis in 1982. While living in Clovis, Brownie and Kathryn were members of Kingswood UMC. Brownie retired in 1996 after 25 years with the NM Environmental Department. In 2007, they relocated to the Albuquerque area to be closer to family and watch their grandson grow up. Brownie was a Mason and a member of Masonic Lodge 40 in Clovis. He enjoyed traveling, gardening and yardwork, home improvement projects, and being with his large extended family. Brownie is preceded in death by his wife Kathryn Edwards on April 23, 2017, along with his nine brothers and sisters. Survivors include two children, a son David Edwards (Spring) of Cedar Crest, NM and a daughter Laura Edwards (Kevin) of Socorro, NM, one grandson Samuel David Brown Edwards of Cedar Crest, NM along with a host of nieces, nephews, other relatives and many friends. To place an online tribute or sign the guest book go to www.chavezfuneralhome.com Arrangements are under the direction of Chavez Funeral Home, 830 N. Fifth Street, Fort Sumner, NM. (575) 355-2311.
To order memorial trees or send flowers to the family in memory of Brown Edwards, please visit our flower store.