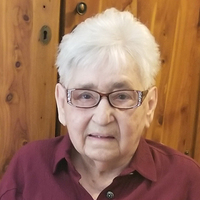 Celina Ortiz Lujan age 87, passed away on October 6, 2020 at the home of her daughter Karla Lujan Prather in Roswell, New Mexico after a long and courageous battle with Alzheimer’s. Celina was born February 28, 1933 in Trementina, NM on the Ortiz family ranch to Jose and May Ortiz. She was delivered by her midwife maternal grandmother, the first of eleven children. She lived on the family ranch throughout her childhood attending a one room schoolhouse there. She fondly remembered the two-day trek to Las Vegas in a wagon for supplies and groceries and camping out in a cave along their journey. She graduated from high school at El Rito Boarding school in El Rito, New Mexico. She was always a trailblazer in her life attending New Mexico Highlands University as an education major at a time when very few women attended college. She then moved to Albuquerque and bought a house on her own. She did not know how to drive, much less own a car, so she walked to her work as a secretary for a credit bureau. She also walked to the Post Office which is where she met the dashing young Leonard Lujan. Their first date was to a rodeo – which would prove a big part of their future lives! When he asked her if she liked to dance, she quickly replied, “Does a cat have a tail!” They married in July of 1959 and started a family which grew to three girls and two boys. After the birth of their second child they left the ‘city life’ behind and moved back to Trementina and their family ranching roots. For the birth of their third child, Celina had to stay with an aunt in Tucumcari because of the severe winter weather that year. The family later moved to the Tucumcari area and worked for the Jimmy Randall Ranch. Husband Leonard always joked that they then moved to Santa Rosa to the John Hicks Ranch because Celina had seen a newspaper advertisement with eggs cheaper in that New Mexico city! In 1970, they moved to the Lazy 6 Cowden Ranch where they lived and worked for twenty-six years. Located about forty miles from Santa Rosa, Celina drove her pick-up twenty miles each way (often through rain and snow storms!) taking her five kids to catch the school bus. With the kids grown and gone Celina and Leonard retired from ranching in 1996 and moved to Elida, New Mexico to be close to family and friends. Leonard passed away there in 2011. Celina loved getting up every morning at 5:00 a.m. and fixing a full breakfast of bacon or sausage, hash browns and eggs with a side of hot cereal. Her passion was making baby quilts for every child born to family and friends which were cherished by them. She always looked forward each year to the Marla Lujan Memorial Roping held in memory of her second daughter who passed in a roping accident. Celina is survived by daughter Karla Prather (Jeff) of Roswell, New Mexico, and grandsons Jeremiah Fortenberry (Sarah) of Austin, Texas, and Colt Prather (Jessie) of Muleshoe, Texas; son Lloyd Lujan of Dalhart, Texas, grandson Chance LaRoe (Kenzie) of Stratford, Texas, and Cress Lujan of Logan, New Mexico; son Dogie Lujan (Debbie) of Templeton, California, and granddaughter NeeLee Lujan; and daughter Darla Lujan and grandchildren Jessica Norman (Jerrett) of Portales, New Mexico, Montana Levacy (Frank) also of Portales, New Mexico, and Colby Lee (Danielle) of Dora, New Mexico. In addition, Celina and Leonard were blessed by thirteen great grandchildren. Preceding her in death were her beloved husband Leonard and precious daughter Marla. Funeral Mass was held at 10:00 am Saturday, October 10, 2020 at St. Anne's Catholic Church in Tucumcari, NM with Father John Paul Afuecheta officiating. Burial followed at El Canyon Cemetery in Trementina, NM. Pallbearers were Colby Lee, Herman Martinez, Colt Prather, Joe Dan Ortiz, Archie James Romero and Troy Witt. Honorary Pallbearers included Jeremiah Fortenberry, Chance LaRoe, Frank Levacy, Cress Lujan, Jerrett Norman and Jeff Owen. Due to the COVID-19 Pandemic Social Distancing guidelines, services were limited to the immediate family. We ask that you keep Celina and her family in your prayers. You may leave a tribute, a favorite memory, or sign the online guestbook at www.chavezfuneralhome.com Arrangements are under the direction of Chavez Funeral Home, 830 N. Fifth Street, Fort Sumner, New Mexico. (575) 355-2311.
To order memorial trees or send flowers to the family in memory of Celina Lujan, please visit our flower store.