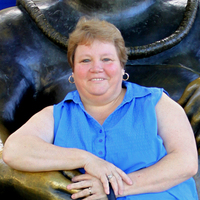 Christy Lou (Mespelt) Flores, 58 of Fort Sumner, passed away Saturday, July 10, 2021 at Covenant Medical Center in Lubbock. She was born September 18, 1962 in Albany, Oregon to the home of Donald Lee Mespelt and the former Dolna Claire Zarones. While her dad worked in the Iron Coal mining industry, Christy attended kindergarten through second grade in Hibbing, Minnesota. Moving with the family back to Oregon, she attended Cannon Beach Grade School and on to High School in Seaside, Oregon. Christy married John Irving in England. She started work with Delta Airlines at Gatwick Airport in West Sussex, England in 1987. They moved to the Dallas/Fort Worth area in 1989 where she continued her career with Delta Airlines at DFW Airport. Her son Jeffrey was born in 1991. In the mid 90's they moved to the Pacific Northwest where she worked at the Portland International Airport. While in Portland she met Andrew Flores online in the World of Warcraft. She finished her career with Delta Airlines after transferring to Albuquerque to be closer to Andrew and retiring to the new family home of Fort Sumner. Christy married Andrew on September 19, 2012 in Fort Sumner, NM. Christy had many interests and hobbies including knitting, cooking, gardening, and traveling. She enjoyed cooking and doing crafts with her grandkids and spoiling and buying noisy gifts for her great-nephew Jacob. She was a huge fan of Broadway and enjoyed traveling to Tucson whenever possible to see the traveling Broadway shows with close family friend Robert Bermudez. Christy also loved to visit the casinos and try her luck on the slot machines. Christy was always a caring and loving person, volunteering her time and talents. She volunteered with organizations and schools over the years. Christy is preceded in death by her Parents, and her close friend Gloria Salas. She is survived by her husband, Andrew Flores of the family home of Fort Sumner, NM; three sons, Jeffrey Irving and Wylie Reed of Vancouver, Washington, Austin Flores (Maria Mendez) of Chicago, Illinois; two daughters Kathleen Plath and husband Tim of Albuquerque, NM; and Kiersey English and husband Travis of Plainview, Texas; two grand daughters Jenavieve and Jazzelyn Anaya. Also surviving are her two sisters, Julie and Laurie Mespelt; three brothers, Pat Mespelt and wife Monique, Don and wife Paula, and Ken Ouellette and wife Micah; two nieces, Jaime Daniels and husband Joey and their son Jacob; and Stephanie Mespelt and Brian Verley and daughter Marley. Christy was diagnosed with AML Leukemia in August of 2017. Christy overcame Leukemia and has battled the complications of a stem cell transplant and infections since December of 2017. It was with the support of the Flores and Mespelt families as well as her close friends that allowed Christy to spend time with her families and friends during this time. Christy's family would also like to offer special thanks to her Doctors; Dr. Gabrielle Meyers and her team along with the nurses of the 14K oncology floor; Dr. Kiran Yalamanchilli and his team along with the nurses and aides of the Covenant Hospital, east seventh oncology floor in Lubbock, Texas. She couldn't have had any better care anywhere. Cremation has taken place. A Memorial Mass will be held at 11:00 am, Monday, July 19, 2021 at St. Anthony Catholic Church in Fort Sumner, NM with Father Sotero A. Sena officiating. Christy will be buried in Evergreen Cemetery, Seaside, Oregon in the family plot with her parents. Arrangements are under the direction of Chavez Funeral Home, 830 N. Fifth Street, Fort Sumner, New Mexico. (575) 355-2311.
To order memorial trees or send flowers to the family in memory of Christy Lou (Mespelt) Flores, please visit our flower store.