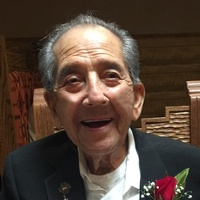 Cirilo J. Baros Jr., 93 a longtime resident of Santa Rosa, NM passed away Thursday, August 2, 2018 in Thornton, CO. He was born August 26, 1924 in Santa Rosa, NM at the home of Cirilo and Elvira (Avila) Baros. He grew up in Santa Rosa and attended Santa Rosa schools. Cirilo served in the U.S. Army, he was inducted on July 1, 1943 in Santa Fe, New Mexico. He served with Battery B, 126th Anti-Aircraft Artillery Gun Battalion. Cirilo served in Normandy, Northern France, Rhineland, and Central Europe. He received several decorations and citations including the European African Middle Eastern Ribbon, Good Conduct Medal, Victory Medal, Belgium Fourragere. He was honorably discharged on January 11, 1946. Although he was proud of his service he was reluctant to talk about it. Cirilo was a longtime parishioner of St. Rose of Lima Catholic Church, and member of the Knights of Columbus. For over 25 years he led the rosary prayers for the deceased church faithful. He was also a member of the American Legion Post #36 in Santa Rosa, U.S. Postal Union. Cirilo worked for the U.S. Postal service in Santa Rosa for 28 years. He retired in 1979. In 2008 Cirilo moved to Colorado and lived in Aurora and Commerce City with his family. While living in Colorado he enjoyed morning visits with the mall walker group, luncheons with the swim group, winning at the casinos in Blackhawk, touring Colorado with his friends and family, and going to the movies. Cirilo was an ever-present feature at numerous activities of the younger grandchildren so even their friends started calling him Grandpa. He was most at ease when he was surrounded by children because he remained a child at heart. Cirilo is preceded in death by his wife of 43 years Ascencion “Chona” Baros; daughters, Stella Ulibarri, Cruzita Sanchez, and Patsy Cordova; grandson Joseph Sanchez, great-granddaughter Ashley Cordova; sons-in-Law Gilbert Gonzales and Jose Sanchez; parents Cirilo and Elvira Baros; and brothers Frank Baros and Murillo Baros. Survivors include daughter, Polly Gonzales of Eerie, CO, son David Padilla and wife Irma of Union City, CA, two sons in law, Tony Ulibarri of Hayward, CA, Alfonso Cordova of Aurora, CO, a sister Amalia Fiorentin of Albuquerque, NM, and a brother Ramon Baros of Albuquerque, NM along with 17 grandchildren, 35 great-grandchildren, 30 great-great-grandchildren and 2 great-great-great-grandchildren, and with numerous nieces, nephews, other relatives and many friends. Viewing and visitation for family and friends will be held on Sunday, August 12th from 1pm-6pm at Chavez Funeral Home.Services will be held on Monday, August 13, 2018 from St. Rose of Lima Catholic Church in Santa Rosa, NM beginning with the recitation of the Most Holy Rosary at 9:30 am followed by the Mass of Christian Burial at 10am with Father Christopher Bernabe officiating. A funeral reception will follow at Blue Hole Convention Center. Graveside services and interment with Military Honors will be held on Tuesday, August 14, 2018 at 1:30 pm at Santa Fe National Cemetery, Santa Fe, New Mexico. Pallbearers will be Tony Ulibarri, Bret Ulibarri, Alfonso Cordova, David Cordova, Mike Flores, Ramon Baros, Santiago Gonzales and Scott Howe. Honorary bearers will include David Padilla, Aaron Gonzales, Eric Gonzales, Stephen Cordova.  All arrangements are under the direction of Chavez Funeral Home, 923 S. Third Street, Santa Rosa, New Mexico. (575) 472-3369.
To order memorial trees or send flowers to the family in memory of Cirilo J Baros Jr., please visit our flower store.