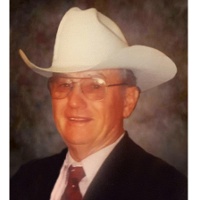 Clifford Franklin, 88 of House, NM passed away Monday, August 5, 2019 at Northwest Texas Medical Center in Amarillo following an illness. Clifford and twin brother Charles were born January 31, 1931 in Clovis to the home of Charles Clifford and Clara Bee (Smith) Franklin. Clifford's grandparents homesteaded in the Tolar, NM area. He attended House Schools, graduating with the class of 1949. He served in the U.S. Army from March 20, 1951 until his honorable discharge on March 6, 1953. His military decorations and citations included Expert Qualification Badge with Carbine, United Nations Medal, and the Korean Service Medal with 2 Bronze Service Stars. Clifford was a longtime farmer and rancher in Roosevelt and Curry County. Clifford was a true horseman, he loved to rodeo, and was an avid team roper, and calf roper. He owned and bred race horses for many years. Cliff won multiple calf roping awards as well as being an excellent bull rider in his youth. He was an avid participant of 4-H and F.F.A. Judging, showing and rodeo. He became a dedicated leader and supporter. Cliff was instrumental in producing 5 Grand Champions and 1 Reserve Grand Champion Steers at the New Mexico State Fair, as well as multiple breed champions. His love for showing, judging, and rodeo was passed down to his younger brothers as well as his many nieces and nephews. Cliff was a major supporter of all Jr. High and High School sports. He seldom missed a game where his nieces and nephews or little brother participated.  Clifford was baptized at First Baptist Church in House, New Mexico.  Clifford is preceded in death by his parents, two brothers, twin Charles Franklin in 2015, and Bob Franklin in 2007, two sisters Ruby Stowe, and Doretha Shultz, two nephews Jerry Franklin and Courtlynn Franklin, two nieces Laura Stowe Hommel, and Rita Stowe. Survivors include Linda Franklin, and Zena Studdard of the ranch home, Warren Franklin of Ruidoso, and a brother Derrell (Karen) Franklin of Melrose along with a host of nieces, nephews, other relatives and many friends. Visitation hours will be Thursday from 1pm to 6pm at Chavez Funeral Home in Fort Sumner. Funeral services will be held at 2:00 pm Friday, August 09, 2019 at the House Baptist Church with Sherman Martin officiating, burial will follow at Tolar Cemetery, Tolar, New Mexico. Pallbearers will include nephews Kohl Studdard, Ky Studdard, Brand Franklin, Keely Studdard, Sky Franklin, and Dusti Caviness. Honorary bearers will include Donald "Pinky" McDaniel, Bob Lee, Bobby Mead, all his nieces, nephews, and friends. Arrangements are under the direction of Chavez Funeral Home, 830 N. Fifth Street, Fort Sumner, New Mexico. (575) 355-2311.
To order memorial trees or send flowers to the family in memory of Clifford F. Franklin, please visit our flower store.