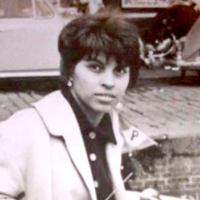 Corina Gonzales, 88, passed away at her home in Clovis, New Mexico on July 3, 2022. She was born on January 30, 1934 in Fort Sumner, NM to the home of Anastacio and Gregoria (Garcia) Aragon. A life long Catholic, Corina was a member of St. Anthony's Catholic Church in Fort Sumner. Corina married Demetrio "Tony" Gonzales on May 23, 1953 in Littlefield, TX. They made their home in Fort Sumner after thier retirement from military service. Besides her family, Corina's passion was helping others. She was pinned a Red Cross Volunteer in Fort Hood, TX. She was a volunteer at Cannon Air Force Base in Clovis and for the past several years, she volunteered at the Church of Christ food bank in Fort Sumner. Corina is proceeded in death by her parents, a brother Anastacio Aragon Jr, a sister Ramona Casaus, and a grandson Charles Stinson. Corina is survived by her husband of 69 years Demetrio Gonzales, her children Theresa Bauman (George Wild) of Barre, Vermont, Carlos Gonzales Sr (Lizbeth) of Lakeland, Florida, Michael Gonzales (Daphne) of Clovis, New Mexico, and Maria Gauna of Lubbock, Texas. She is also survived by 14 grandchildren, 44 great-grandchildren, and 3 great-great-granchildren. Funeral services will be held at 10:00 am Friday, July 8, 2022, Holy Rosary followed by the funeral Mass with Father Sotero A. Sena officiating. Interment will follow at St. Anthony Cemetery with grandsons Tony Gonzales, A.J. Gonzales, Noah Gonzales, Carlos A. Gonzales, Jeremy Gauna and Claudio Gonzales serving as pallbearers. Arrangements are under the direction of Chavez Funeral Home, 830 N. Fifth Street, Fort Sumner, New Mexico. (575) 355-2311.
To order memorial trees or send flowers to the family in memory of Corina Gonzales, please visit our flower store.