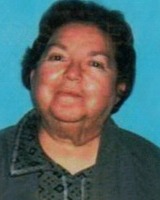 Corinne Duran, 87 of Santa Rosa, NM passed away peacefully on Friday, November 26, 2021 in Tucumcari, NM. Corinne was born on June 20, 1934 in Santa Rosa to Juan Isidro Duran and Avelina (Garcia) Duran. Corinne was raised in Santa Rosa, where she graduated from Santa Rosa High School in 1952. She went on to attend New Mexico State University, earning her Masters in Education. Corinne’s career began with her working with Dr. Miligan in Santa Rosa, followed by her 33 years of service as a first and second grade teacher for Santa Rosa Consolidated Schools. Corinne inspired many of her former students to become teachers, and later in life, some of her former students would be her caregivers. Corinne had many fond memories of her students and her teaching career. Corinne made her home in Santa Rosa where she was an active parishioner at Saint Rose of Lima Catholic Church. She was a member of the Altar Society, Las Hijas de Maria and also taught Catechism. In 1992 she moved to Albuquerque where she was a caregiver for her sister Mary and was also active at Saint Anne’s Catholic Church. In 2000 Corinne moved to Amarillo, TX taking care of the Nuns at the convent. In 2014 Corinne moved back to Santa Rosa where she lived at Vecinos Sanos Assisted Living. Corinne enjoyed watching EWTN, old movies and TV shows. She also enjoyed walking, singing and telling jokes! Corinne is preceded in death by her parents, her sisters; Mary (Lalo) Sanchez, Benita (Conrad) Kewiet DeJonge and Frances Paiz, her brother; Reynaldo (Jesse) Duran and her great-nephews; Chris A. Marquez and Robert Horton. Corinne is survived by her sister; Sister Geraldine, her nephews; Tony (Virginia) Aragon and John (Bernadette) Paiz, her nieces; Margaret (Robert) Lucero, Annette Kewiet DeJonge, Denise Holliday, Evelyn Ramona Montgomery, Susan (Louie) Marquez and Betteena (Frank) Pizano and her brother-in-law; Mauricio Paiz. Visitation will be Wednesday, December 1, 2021, from 1-6pm at Chavez Funeral Home in Santa Rosa. Recitation of the Most Holy Rosary will be Saturday, December 4, 2021 at 10am at Saint Rose of Lima Catholic Church, immediately followed by the Mass of Christian Burial. Interment of cremains will follow at Saint Joseph Cemetery in Santa Rosa with John Paiz, Ernesto Marquez, Anastasia Romero, Jose Luis Marquez, Juan Paiz and Jaida Paiz serving as Urn Bearers. Honorary Urn Bearers will be; Margaret Lucero, Denise Holliday, Mona Montgomery, Betteena Pizano, Tony Aragon, Louie Marquez, Frank Pizano as well as her remaining great-nephews and nieces. All services are under the direction of Chavez Funeral Home, 923 S. Third St., Santa Rosa, NM 88435. 575-472-3369. To place an online condolence or tribute, please visit www.chavezfuneralhome.com.
To order memorial trees or send flowers to the family in memory of Corinne Duran, please visit our flower store.