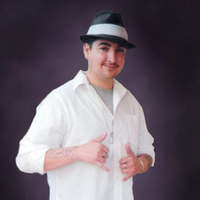 David Chavez, age 40 of Fort Sumner, NM passed away Wednesday evening, October 2, 2019 at Covenant Medical Center in Lubbock, Texas following an illness. He was born February 17, 1979 in Amarillo, Texas.  David attended and graduated from Fort Sumner High School. He served in the U.S. Army for five years from 1997 until his honorable discharge in 2002. He completed his Basic Training at Ft. Campbell, KY and was stationed in Germany. David was assigned to C Battery as a Cannon Crew-member. His citations include the National Defense Service Medal, Army Service Ribbon, Overseas Service Ribbon, and Army Lapel Button. David attended Centeral New Mexico Community College (CNM) in Albuquerque for four years. He received a degree in Radiology.  He made his home in Albuquerque for several years before returning to Fort Sumner in 2014. According to his sister, David was a "kid at heart", loved Disney movies, and enjoyed watching TV action movies. David attended The Church On The Hill in Fort Sumner. David is preceded in death by his mother Mary Alice Montano on June 19, 2017, a cousin Eric Aragon on March  28, 2014, and his uncle Bobby Aragon on November 11, 2018. Survivors include his dad, Kenneth Montano of Vaughn and a sister Kenneta Montano-Aragon and her fiance Alex Adams of Portales along with numerous aunts, uncles, cousins, other relatives and friends. Visitation hours will be Tuesday, October 8, 2019 from 1pm to 6pm at the Chavez Funeral Home. Funeral services will be held at 11:00 AM Wednesday, October 9, 2019 at the Chavez Funeral Home Chapel with Mr. Richard Terrell officiating. Honorary bearers will be Dominic Lopez, Benny Aragon, Phillip Lucero, and Jose Gonzales. Cremation will take place following the services. All arrangements are under the direction of Chavez Funeral Home, 830 N. Fifth Street, Fort Sumner, New Mexico. (575) 355-2311.
To order memorial trees or send flowers to the family in memory of David Chavez, please visit our flower store.