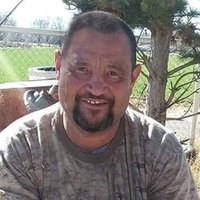 David Vidal Gauna, 55 of Fort Sumner, NM passed away on Saturday, November 23, 2019 following a sudden illness. He was born January 28, 1964 at the Cannon Air Force Base Hospital. He grew up in Fort Sumner where he attended school. David participated in Football at Fort Sumner High School. David worked as a ranch hand of area cattle ranches doing day work. He previously worked as a seismograph operator in south Texas and on the King Ranch. He also worked repairing windmills with a water well service company. David loved the outdoors, hunting, fishing, and trapping. He was also a rock hound and enjoyed prospecting. David is preceded in death by his maternal grandparents Juan and Emilia Maes, and his paternal grandparents Catarino and Juanita Gauna. A loving father, son, brother, grandfather and friend, David will be missed by his two sons Emilio Gauna of Fort Sumner, Steve (Lisa) Gauna of Fort Sumner, his grandchildren Luciano, Alijah, and Aleidrah Gauna, his parents Vidal and Ricardita Gauna, and his brother Tony (Maggie) Gauna all of Fort Sumner along with a host of other relatives and many friends. Visitation hours will be Wednesday from 1pm to 5pm and Thursday from 4pm to 6pm at the funeral home. Funeral services will be held at 10:00 am Friday, November 29, 2019 at the Chavez Funeral Home Chapel. Burial will follow at Fort Sumner Cemetery. Arrangements are under the direction of Chavez Funeral Home, 830 N. Fifth Street, Fort Sumner, New Mexico. (575) 355-2311.
To order memorial trees or send flowers to the family in memory of David Gauna, please visit our flower store.