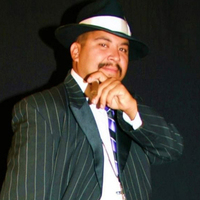 David Sena Jr., 40 of Albuquerque, NM passed away at his home on Thursday, November 5, 2020 following an illness. He was born March 3, 1980 in Albquerque to the home of David A. and Mary (Betancourt) Sena. He attended Highland High School. David married the love of his life, Monique Nunn on May 5, 2010 in Albuquerque. they loved each other beyond words for over 16 years and the bond they had will never be broken. David was the type of guy to always lend a helping hand to anyone in need. He always had a smile on his face and a joke or something funny to say. He loved old school style, old cars, music, hunting, fishing, camping, cruising, car shows, and making people laugh. But most of all he loved his family and friends and spending time with them. David had many professions but always said he was a plumber by heart and blood. David is preceded in death by his paternal grandfather Anastacio Sena, his father David Sena Sr., father in law Gene Nunn, and three cousins Cindy Sena, Josiah Raul Gomez, and Carlos Anastacio Sena III. Survivors include his wife Monique Nunn-Sena, four sons Angel Sena (Desiree), Andres Sena, David Sena III, Nathan Sena, and one daughter Sophia Sena all of Albuquerque. Also surviving is his mother Mary Sena, two brothers Mario Sena (Alexis), and Joshua Sena, his paternal Grandmother Antonia Sena and his mother in law Mary Lopez along with a host of other relatives and friends. Services were held at 11:00 am Thursday, November 12, 2020 at the Chavez Funeral Home Chapel with his uncle, Father Sotero A. Sena officiating. Cremation followed the services. Interment of cremains will be held at a later date. Due to the current COVID-19 Health Order, the funeral ceremony attendance was limited to 5 family members. We ask that you keep David and his family in your prayers. You may leave a tribute, share a favorite memory or sign our online guest book for his family. Pallbearers included Angel Sena, Andres Sena, Tom Nunn, Junior Martinez, James Gonzales, Dominick Lovato, Mario Sena, and Josh Sena. Honorary bearers will include Albert Mireles, Joaquin Sena, and James Gonzales Jr. Arrangements are under the direction of Chavez Funeral Home, 830 N. Fifth Street, Fort Sumner, New Mexico. (575) 355-2311.
To order memorial trees or send flowers to the family in memory of David Sena Jr, please visit our flower store.