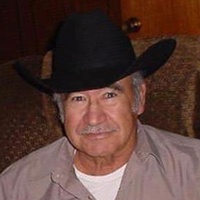 Delfino “Nino” Baca, 87, was called home to be with his wife on March 14, 2019. He was a resident of Tecolotito, NM and a member of San Jose Catholic Church in Anton Chico, NM.Delfino was born on May 23, 1931 in Anton Chico, NM to the late Silverio Baca Jr. and Benigna Garcia. He was one of 11 siblings. He served in the Navy for 8 years before living out his true passion, ranching. He served as a rancher/ farmer while working in construction around the state of New Mexico. He shared his passion with his wife Flora, they were often seen together going to the ranch to take care of cattle or gardening. He loved to share his passion for ranching and farming with his kids and grandkids. He was an avid reader and loved to read westerns and war novels. He is preceded in death by his wife of 55 years, Flora Baca. His parents Silverio and Begnina Baca, his brothers Julian Baca, Robert Baca, Boni Baca, Florencio Baca, Ciprano Baca, and Jose Baca. He is survived by his daughters Delfinia Montano and husband Ralph of Edgewood, NM and Marie Baca-Maestas and husband Marvin of Tome, NM; his 6 grandchildren Amanda Olivas and husband Manuel, Lucas Montano, Carolina Maestas, Marissa Montano, and Alejandro Maestas; his brothers: Tomas Baca and wife Cleo of Las Vegas, NM, Manuel Baca and wife Inez of Gallinas, NM and George Baca and wife Mary of Las Vegas, sister-in-law Mary Baca and sister Anne Baca of Anton Chico; and numerous nieces and nephews.  Recitation of the Most Holy Rosary followed by the Mass of Christian Burial will be on Saturday, March 23, 2019 at 10:00 A.M. at San Jose Catholic Church in Anton Chico, NM, with Father Antonio Mondragon officiating.  Interment of Nino’s cremains, along with those of his beloved wife, Flora’s will follow at Sangre de Cristo Cemetery in Upper Anton Chico.Serving as Urn Bearers are; Amanda Olivas and husband Manuel, Lucas Montano, Carolina Maestas, Marissa Montano and Alejandro Maestas.The family would like to thank the staff of Kaseman Presbyterian Hospital Hospice Unit for the amazing care and support during our dad's stay. We also would like to thank Debra Tapia for her care of our parents.  All services have been entrusted to Chavez Funeral Home, 923 S. Third St., Santa Rosa, NM  88435.  575-472-3369.  To place an on-line condolence please visit www.chavezfuneralhome.com
To order memorial trees or send flowers to the family in memory of Delfino Baca, please visit our flower store.