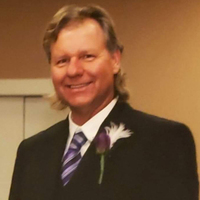 Dennis Frank Allen, 59 of Hobbs, New Mexico passed away Thursday, December 26, 2019 at University of New Mexico Hospital in Albuquerque following a sudden illness. He was born August 20, 1960 in Albuquerque, NM to the home of James C. and Mary Elizabeth (Walters) Allen. Dennis grew up in Albuquerque where he attended and graduated from Cibola High School. Following graduation he attended New Mexico Junior College in Hobbs. Dennis made his home in Hobbs for 30 years, he retired as an oil field truck driver. He enjoyed home improvement projects, automotive work, and quality time spent cruising with close friends and family. Dennis is preceded in death by his father James Allen in 2017. He is survived by his mother Mary Diffe of Jamestown, NM, a brother James Allen and his wife Neva of Jamestown, NM, a sister Kathy Hamilton and her husband Lance of Clovis, NM, two sons Daniel Allen and his wife Erin of Hobbs, NM, Mike Allen and his wife Stacy of Santa Barbara, CA, and one daughter Chrystal Allen of Goleta, CA. Also surviving are three grandchildren along with a host of other relatives and friends. A graveside service will be held at 1:00 pm Saturday, January 4, 2020 at Fort Sumner Cemetery, Fort Sumner, New Mexico with family friend, Mr. Billy Moore officiating. All arrangements are under the direction of Chavez Funeral Home, 830 N. Fifth Street, Fort Sumner, New Mexico. (575) 355-2311.
To order memorial trees or send flowers to the family in memory of Dennis F. Allen, please visit our flower store.