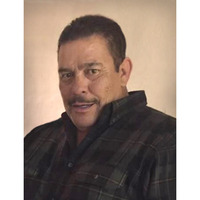 Edward "Eddie" Sisneros, age 53, former Vaughn, NM resident passed away Thursday, March 10, 2022 at Covenant Health Hospital in Hobbs, NM following an illness. He was born December 10, 1968 in Santa Rosa. Eddie attended school at Vaughn, NM graduating with the class of 1988. While in school he participated in Vaughn Eagle sports including football, basketball, and track. Eddie worked for NOVA Group an infrastructure construction company. He travelled with the company across the western U.S., he lived in Estancia, East Mountains, Las Vegas, Nevada, and Oceanside, California before moving to Hobbs, NM four years ago. According to Eddie's family he enjoyed fishing, was a talented musician playing the guitar and drums - but please don't ask him to sing. Eddie attended music concerts with his family and friends. He was an avid Dallas Cowboys fan. Eddie is preceded in death by his maternal grandparents, Merenciano and Adelina Sisneros, his uncle Merenciano Sisneros Jr., and an aunt Rita Merino. Eddie is survived by his girlfriend, Julie Romero of Hobbs, his mom Elsie Sisneros of Vaughn, a son Edward Sisneros (Rachel) of Allen, TX, and a daughter Arianna Sisneros (Jason) of Albuquerque. Also surviving are Julie's children Adreanna Berunda of Hobbs, Yarelie Chaviraof New Braunfels, TX, and Efrain "Nini" Chavira of Odessa, TX and a papo to 5 grandsons, his three sisters Annette Irribarren (Arnold) of Lakewood, CA, Elizabeth Crouthamel of Clovis, and Theresa Sisneros of Clovis along with several nieces and nephews other relatives and many friends. Viewing and visitation will be held on Saturday, March 19, 2022 beginning at 10:00 am at St. Mary's Catholic Church in Vaughn, NM. Holy Rosary will be held at 11:00 am followed by the funeral Mass with Father Sotero A. Sena officiating. Burial will follow at Evergreen Cemetery in Vaughn. Pallbearers will include Manuel Sisneros, Michael Sisneros, Isaac Rubio, Efrain Chavira, Jacob Gauna, and Mark Madrid. All his many friends and family will serve as honorary bearers. Arrangements are under the direction of Chavez Funeral Home, 830 N. Fifth Street, Fort Sumner, New Mexico. (575) 355-2311.
To order memorial trees or send flowers to the family in memory of Eddie Sisneros, please visit our flower store.