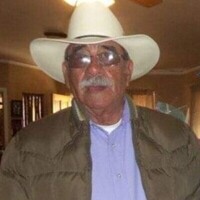 Erminio "Wedo" Gonzales, 88 a longtime Vaughn, NM resident and a recent resident of Las Vegas, NM passed away Friday, June 25, 2021 at Meadows Care Center in Las Vegas, New Mexico. He was born February 5, 1933 to the home of Lorenza Gonzales, she passed away in 1942. Erminio was raised by Agapito and Aureila Abeyta in Puerto De Luna. He attended school in PDL. Erminio served in the U.S. Army during the Korean Conflict from 1949 until his honorable discharge in 1951. On June 27, 1959, Erminio married Valeria Gauna at St. Mary's Parish in Vaughn, NM. This week completed 62 years of marriage to this union. Erminio was employed with the Town of Vaughn, Water Utility Department until his retirement in 1975. Following his retirement he worked transporting train engineers and conductors. He became friends with many of them. Erminio was a past member of the Vaughn Volunteer Fire Department, Knights of Columbus, and American Legion. He was a member of the Funeral Honor Guard for many years in Vaughn. His pastimes include fishing, hunting, preparing a garden, and being with his family. He was a longtime member of St. Mary's Parish in Vaughn and recently a member of Immaculate Conception Church in Las Vegas. Erminio is preceded in death by his mother, adoptive parents, his mother in law, a sister Stella Perea, brothers-in-law Tano Gauna, Tony Gauna, and Joe Perea. A loving husband, father, grandfather, brother, uncle and friend. He will be missed by his family, his wife Valeria Gonzales of the home in Las Vegas, a daughter Agnes Valencia and husband Ricardo of Anton Chico, a son Thomas Gonzales and his wife Lillian of Pastura, three grandchildren Valerie Romero and husband Clarence, Thomas Gonzales and wife Samantha, Joaquin Gonzales and wife Alyssa, six great-grandchildren Jacquelyn, Madilyn, Juliet, Joaquin II, Thomas III, and Jacob, two sisters Juanita Archibeque and Elva Martinez of Colorado, brothers-in-law Lucio (Connie) Gauna, Charlie (Ramona) Gauna, Joe (Florinda) Gauna, sisters-in-law Rosie Marino, Carmel (Clyde) Hart along with many nieces, nephews, other relatives and friends. Visitation hours will be Monday, June 28, 2021 from 1pm to 6pm at the Chavez Funeral Home in Santa Rosa, NM. Holy Rosary followed by the funeral Mass will begin at 11:00 am Tuesday, June 29, 2021 at St. Mary's Catholic Church in Vaughn, NM with Father Timothy Meuer officiating. Interment will follow at Evergreen Cemetery in Vaughn, NM. Pallbearers will be Thomas Gonzales, Joaquin Gonzales, Clarence Romero, James Perea, Felix Valdez, and Joe Gauna. “A father is a source of strength, a teacher and a guide, the one his family looks up to with loving trust and pride. Thank you, God by blessing us with a great dad.” Please share a favorite memory, leave a tribute, or sign the online guest book. Arrangements are under the direction of Chavez Funeral Home, 923 S. Third Street, Santa Rosa, New Mexico. 575 472-3369. www.chavezfuneralhome.com
To order memorial trees or send flowers to the family in memory of Erminio Gonzales, please visit our flower store.