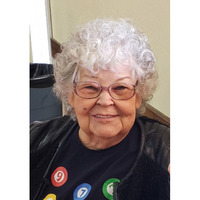 Mary Esther Dunn, 75 of Fort Sumner, NM passed away Wednesday, March 31, 2021 at Plains Regional Medical Center following a sudden illness. She was born on August 27, 1945 in Fort Sumner, NM the daughter of Eddie and Nora (Gutierrez) Anaya. Esther attended Fort Sumner Schools. She married James Allen Dunn in Fort Sumner on June 2, 1965. While her children were in school, Esther was a stay at home mom. She worked as a housekeeper for several Fort Sumner families. For over 30 years she worked at Addison Drug Store. She was a member of The Church on The Hill. Esther taught the Catechism Classes at St. Anthony Catholic for many years. Esther enjoyed playing BINGO, loved to cook and care for her yard. She especially loved caring for her family, especially her grandchildren and great-grandchildren. Esther was always doing something for others. In many ways this defined her life of faith. The main recipient of that loving care was her family. She might of shown this through a great meal, a long conversation or simply being present in their lives. Her love for others reached out to her friends, and was also shown in her dedication to her work. Esther is preceded in death by father Eddie Anaya, her mother Nora Casaus, a sister Susie Bailon, granddaughter Mary Yvonne Dunn, and a great grandson Corbin Aragon. She is survived by her husband of 55 years, James Allen Dunn of Fort Sumner, six children, three daughters Deborah Maupin (Will) of House, NM, Sarah Aragon of Fort Sumner, and Corinne Mares Ulibarri of Rio Rancho, three sons, James Dunn Jr., of Phoenix, AZ, B.J. Dunn of Albuquerque, and Randy Dunn of Albuquerque, two granddaughters she raised Jessica Harris (Ryan) of Clovis and Lenore Christensen (Elton) of Las Vegas, NV, two sisters Lorene Delgadillo and Geraldine Griego both of Fort Sumner, Eddie "Sonny" Anaya (Tina) of Clovis, and Andy Anaya (Irene) of Fort Sumner. Also surviving are 16 grandchildren and 28 great-grandchildren along with a host of other relatives and many dear friends Visitation hours for family and friends were held from 1pm to 6pm on Monday, April 5, 2021 at the Chavez Funeral Home Chapel. Funeral services were held at 2:00 pm Tuesday, April 6, 2021 at The Church on The Hill, Anna Teeter-Gentile officiated. Interment followed at Fort Sumner Cemetery. Pallbearers were Anthony Aragon, Elton Christensen, Ryan Harris, Mario Carroll, Will Maupin, Larry Roybal. Honorary bearers were all her family and many friends. We kindly ask that you keep Esther and her family in your prayers. You may leave a tribute, a favorite memory, or sign the online guestbook at www.chavezfuneralhome.com The family appreciates the outpouring of love and support from throughout the Fort Sumner community. Those with contributions to assist the Esther Dunn family with funeral costs may contact the funeral home. Arrangements are under the direction of Chavez Funeral Home, 830 N. Fifth Street, Fort Sumner, New Mexico. (575) 355-2311.
To order memorial trees or send flowers to the family in memory of Esther Dunn, please visit our flower store.

The Church On The Hill - Fort Sumner