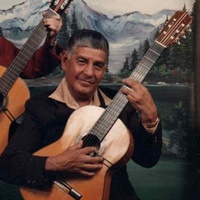 Fernando Chacon, 91, of Santa Rosa, NM passed away peacefully surrounded by his family at Vida Encantada in Las Vegas, NM on Tuesday, May 15, 2018. Fernando was born on April 6, 1927 in Santa Rosa, NM to the home of Gabriel Garduno “G.G.” Chacon and Olegaria (Baca) Chacon.  He was the youngest child in his family, having two older brothers and four older sisters.  A life-long Catholic and parishioner of Saint Rose of Lima, Fernando was a man of faith and humility. He attended school in Santa Rosa before he began his long work career. Fernando made his home in Santa Rosa where he enjoyed a long and varied career.  At age 7, he started playing the guitar.  His love of the guitar and music would lead to recording music with his special grand-nephew, James Bryson.  At age 14, Fernando began working odd jobs in town-and this too, would lead to his long work career.  At this young age, Fernando also played guitar with several local music groups and entertained dancers with music ranging from Rancheras to Boogie-Woogie, to Swing and Jazz.  At 18, he worked with Southern Pacific Railroad and at age 23 began working on Old Route 66 for the Lowder-Milk Construction Company.  In 1966 Fernando worked part-time for Skousen-Hise Construction Company, improving Route 66.  On May 9, 1966 he began his career with the City of Santa Rosa as a truck driver, transferring to the Water Pollution Control Facility (WPFC) in 1982.  After 24 years of service, Fernando retired from the City of Santa Rosa on April 30, 1990. Throughout Fernando’s life he continued to play guitar for his entertainment and also joined the group, Trio Los Ponchos in 1969.  He played Rancheras, Valses, Boleros, Huapangos and Sones for many dances.  In 1993 he and his grand-nephew, James Bryson formed El Dueto Diamante.  Together they recorded many original New Mexican compositions—the duo was widely renowned for their musical talent.  Fernando enjoyed spending time with his family, playing his guitar and shopping in area music stores. Fernando is preceded in death by his parents, sisters; Mary Chacon, Predicanda Chacon, Guadalupe “Pita” Chacon and Rosita Chacon, brothers; Jose Matias Chacon and Fernandito Chacon a nephew Eugenio Chacon, and a special niece and caregiver for many years Patricia Montoya. He is survived by his great-nephew; James “Jimmy” Bryson,  nieces, Christina Esquibel of Santa Rosa, Luisa (Jerry) Chappell of Santa Rosa, Claudina (Jerome) Garcia of Anton Chico, Rosie Bryson of Tennessee, Jerry Don Lopez of Las Vegas, Nevada, Frutoso Montoya of Albuquerque, as well as numerous nephews, nieces, relatives and friends. Recitation of the Most Holy Rosary will be on Tuesday, May 22, 2018 at 10:00 A.M. from Saint Rose of Lima Catholic Church, followed by the Mass of Christian Burial. The family kindly requests that guests who wish to offer condolences and support do so just prior to the start of services at the Church.   Interment of cremains will follow at a later date at La Morada Cemetery in Santa Rosa. All arrangements have been entrusted to Chavez Funeral Home, 923 S. Third St., Santa Rosa, NM 88435.  (575) 472-3369.
To order memorial trees or send flowers to the family in memory of Fernando Chacon, please visit our flower store.