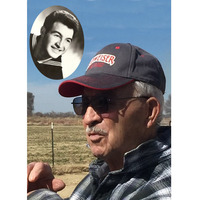 Holy Rosary followed by the funeral Mass will be held at 10:00 am Wednesday, December 22, 2021 at St. Anthony Catholic Church in Fort Sumner with Father Christopher Bernabe officiating. Interment will follow in the Garden of Memory at Fort Sumner Cemetery. Pallbearers will be his grandsons, Lucas Gauna, Michael Lucero, Jeremy Gauna, Josh Gauna, Joaquin Nieto, Gabriel Nieto, Nicholas Brown and Damon Martinez. Honorary pallbearers are his remaining grandchildren, Katie and Trent Barillas Fogarty, Jenah Jo Gauna, Jarrod Gauna, Shelly Nieto, Marissa and Marcus Gonzales, Melissa “Rose” Jansson, Jennifer Dostie, Philip Martinez, Hannah Martinez and a special nephew, Michael Gauna. On Sunday, December 19, 2021, Fred Gauna, 90, of Ft. Sumner, passed peacefully surrounded by the love of his family. Fred was born on November 20, 1931, in Yeso, NM, to Catarino and Juanita Gauna. Fred held many titles in his lifetime, including, friend, petty officer 3rd class, veteran, business owner, son, brother, husband, Father, - but his most cherished title was simply “Grampo or Gramps.” Fred surrounded himself with good friends who he considered family. Fred had a kind heart and never hesitated to extend a helping hand. He loved watching and attending sporting events, especially when his children and grandchildren were participating. Fred had a passion for cooking which began in the U.S. Navy during his service in the Korean war. After the war, he worked at several restaurants, eventually managing his own. In 1968 he purchased Foley’s Bar in downtown Ft. Sumner and changed its name to Fred’s Bar. In 1978 Fred and Mary took over the historical Golden Ox building allowing them to expand their business and step into the food industry. In the fall of 1980, the Gauna’s purchased the centrally located El Zorro Restaurant. With the new location, Fred and Mary changed the name of the restaurant to Fred’s Restaurant and Lounge and the rest is history. Fred is preceded in death by the love of his life, Mary Casaus Gauna (2014), his parents, Catarino and Juanita Gauna, sisters Rufina Gauna and Dorothy G. Gutierrez, an infant brother, Billy, two infant granddaughters, Michelle and Rena Martinez, and an infant grandson, Kristopher Gauna. Those left behind to cherish his memory are his children, Ron Gauna and wife Marie of Ft. Sumner, Paul Gauna of Ft. Sumner, Michael Martinez and wife Iva-Jo of Roswell, Mary Ann Brown of Lubbock, and Robert Martinez and wife Christina of Clearwater, Florida. He is survived by his brothers, Vidal (Ricarda) Gauna of Ft. Sumner, Bonnie Gauna (Katherine) of Roswell, and his sisters, Helen Zamora of Ft. Sumner, Betty De Los Santos (Richard) of Ruidoso, NM and Barbara Gauna of Ft. Sumner. He is also survived by 25 great-grandchildren and 2-great-great grandchildren, with another great-great grandson due in February. Please keep Fred and his family in your prayers. You may leave a note of condolence or share a favorite memory with the family at www.chavezfuneralhome.com. Arrangements are under the direction of Chavez Funeral Home, 830 N. Fifth Street, Fort Sumner, New Mexico. (575) 355-2311.
To order memorial trees or send flowers to the family in memory of Fred G. Gauna, please visit our flower store.