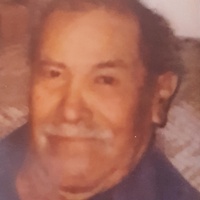 George "Beve" Sena, 86 of Fort Sumner, NM passed away Wednesday, September 12, 2018 at his home. He was born June 21, 1932 in Fort Sumner to the home of Reymundo and Inez (Lopez) Sena. Beve grew up in Fort Sumner and worked for many years as a carpenter.He married Gloria Jean Maes on July 6, 1964 in Fort Sumner.Beve was a lifelong Catholic and a member of St. Anthony Catholic Church in Fort Sumner. He enjoyed spending time with his grandson, fishing, and especially enjoyed watching wrestling with his son.He is preceded in death by his parents, a son George Sena Jr. on February 3, 2006, four sisters Mela Nieto, Odelia Marrujo, Benerita Roybal, Viola Gutierrez and one brother Eugene Sena Sr.He is survived by Gloria Jean Sena, his wife of 54 years, a son Tomas Sena and his wife Glenda, one grandson Tomas Sena Jr., all of Fort Sumner, two brothers Eloy (Patty) Sena of Albuquerque, Daniel (Emma) Sena of Clovis, two sisters Vicky (Pino) Salguero of Albuquerque, and Celina Lopez of Roswell along with a host of nieces, nephews, other relatives and many friends.Visitation hours will be Saturday and Sunday from 1pm to 6pm at the funeral home and from 9am to 10am before the funeral Mass. The Mass of Christian burial will be celebrated at 10:00 am Monday, September 17, 2018 at St. Anthony Catholic Church with Father Sotero A. Sena officiating. Burial will follow at Fort Sumner Cemetery. Pallbearers will include Aurelio G. Lopez, Aurelio Lopez, Toby Roybal, Eugene Sena Jr., Jorge Ramirez, Arturo Ramirez, Felipe Ramirez, and Leonard Mestas.All arrangements are under the direction of Chavez Funeral Home, 830 N. Fifth Street, Fort Sumner, NM. (575) 355-2311
To order memorial trees or send flowers to the family in memory of George "Beve" Sena, please visit our flower store.