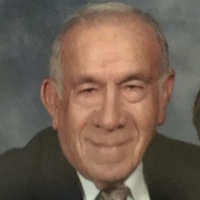 Gilbert Manuel Romero, 88 of Santa Rosa, NM passed away at his home on Wednesday, February 7, 2018. His family was at his bedside. He was born December 14, 1929 in Colonias, NM to the home of Manuel and Ignacita (Ulibarri) Romero. He attended and graduated from Santa Rosa High School in 1947. Gilbert served his country in the United States Navy from 1950-1954. Following his honorable discharge he attended a Junior College in Lamar, Colorado from 1954-1956, and Highlands University from 1956-1958 where he received a Bachelor's Degree. He made his home in Las Vegas, NM from 1958-1961.Gilbert married Agnes Dimas on January 6, 1962 at St. Rose of Lima Parish in Santa Rosa. Gilbert worked as an independent insurance agent for several years, he later worked for A.J. Irwin Insurance, Sam Brown Insurance, and Insurance Services of New Mexico. He retired in 2008.Gilbert was active in his community, her served on the Santa Rosa Volunteer Fire Department for many years, Santa Rosa Lions Club, and Knights of Columbus Council. He served one term as Guadalupe County Treasurer. He was an avid Lion's fan, and attended and supported his children at all their sporting events.He is preceded in death by his parents, a brother Eddie Romero, and three sisters Carmen Houlihan, Herlinda Valverde and Anita Anaya.Survivors include his wife of 56 years, Agnes Romero of the family home in Santa Rosa, a daughter Julie Lott (John) of Rio Rancho, three sons Dominic Romero (Susan Chavez) of Santa Rosa, Steve Romero (Mary Frances Laumbach) of Albuquerque, and Daniel Romero (Millie) of San Diego, CA, one sister Barbara Padilla (Larry), and a brother Richard Romero (Nina) both of Albuquerque. Also surviving are nine grandchildren Josh Lott (Rebecca) of Bremerton, WA, Rebekah Lott of Albuquerque, Rachel Jones (Logan) of Alamogordo, Connor Lott of Rio Rancho, Steve Romero Jr., of Denver, CO, Ashlee Maestas of Dallas, TX, Gillian Sturgeon of San Francisco, CA, Joseph Romero and Andrew Romero both of San Diego, CA, two great-grandchildren Natalie Lott of Albuquerque and Joey Lott of Bremerton, WA along with many nieces, nephews, other relatives and many dear friends.A rosary will be held at 1:30 pm Saturday, February 10, 2018 at St. Rose of Lima Catholic Church in Santa Rosa, the funeral Mass will follow at 2:00 pm with Father Christopher Bernabe officiating. Burial of cremains will follow at St. Joseph Cemetery.All arrangements are under the direction of Chavez Funeral Home, 923 S. Third Street, Santa Rosa, New Mexico. (575) 472-3369. To place an online tribute or sign the guestbook go to www.chavezfuneralhome.com
To order memorial trees or send flowers to the family in memory of Gilbert M. Romero, please visit our flower store.