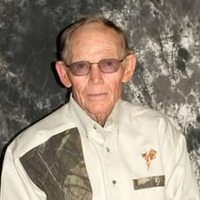 Glenn D. Holland, 90 of Fort Sumner, NM passed away peacefully at his home on Monday, October 21, 2019 following an illness. Glenn was born to the home of Aubrey C. and Elizabeth Bartlett Holland on January 3, 1929 in Coldwater, Kansas. He grew up in Coldwater and north of Clovis. He attended school at Pleasant Hill, NM. Glenn married Ruth Winegeart on June 29, 1946 in Portales, New Mexico. They made their home in Clovis that year before moving to Grady for four years before they settled in Fort Sumner in August 1953 and raised their family. Glenn worked for Farmer’s Electric Cooperative from the age of 17, he began as a lineman in Clovis at 65 cents an hour – good money for that time. He retired in February 2010 after completing 64 years at Farmer’s Electric Cooperative, he retired as Line Superintendent for the entire Farmer’s Electric Cooperative area. He was awarded the Presidents Medal and National Safety Award along with a watch from Farmer’s Electric for saving the life of his friend, Joe Mitchell, on April 22, 1968. Glenn was an active member of the Fort Sumner Community; he was awarded Citizen of The Year by the De Baca County Chamber of Commerce in 1987 and served as Grand Marshall of the Old Fort Days Parade. He also served in the Lions Club and was a longtime member of the Fort Sumner Fire Department. Glenn helped run the Bowl-O-Matic Lanes for over thirty years. He was involved in several bowling leagues and would travel to bowling tournaments. Glenn enjoyed sports, photography, hunting, fishing, and trips to Alaska. He played baseball, basketball and ran track in high school. He loved attending all the Fox-Vixen sporting events, especially those that involved his children, grandchildren, and great-grandchildren. He enjoyed tinkering on cars and tractors and could fix anything. Glenn is preceded in death by his father Aubrey C. Holland in 1944, his mother Elizabeth Holland-Smith, his step father Gib Smith, a daughter Glenda Collins, two brothers Lawrence Holland, and Dan Holland, and two sons in law Rick Giannini, and William Collins. Survivors include his wife of 73 years Ruth Holland of the family home in Fort Sumner, a son Mel Holland (Pat) of Ruidoso, a daughter Nancy Giannini of Fort Sumner, granddaughters Michelle Bonds (Lyndel) of Fort Sumner, Brook Roper (Ryan) of Alto, four grandsons Brad Holland (Kasi) of Fort Sumner, Marcus Giannini of Oklahoma City, OK, Michael Giannini of Plano, TX, and William Collins of Prosperity, SC, eight great-grandchildren Tra’von, Aubrey, Cayven, and Harley Bonds, Jordan and Derrick Holland, Faith and Payson Roper. Glenn is also survived by two brothers Bud Holland (Doris) of Amarillo, Bill Smith (Donna) of Clovis, two sisters Joyce Lewey (Eugene) and Kathy Holland all of Sheffield, AL. Glenn also helped to raise Debbie Tyler (Robert) of Clovis and is also survived by a dear friend and longtime co-worker Charlene Mitchell, along with a host of other relatives, many friends and co-workers. Visitation hours will be Sunday, October 27, 2019 from 1pm to 5pm at the Chavez Funeral Home Funeral services will be held at 10:00 am Monday, October 28, 2019 at First Baptist Church in Fort Sumner, New Mexico with Mr. Richard Terrell officiating. Interment will follow at Fort Sumner Cemetery. Pallbearers will include Jerome Segura, Robert Tyler, Ryan Roper, Lyndel Bonds, Eric Rusk, Brad Holland, Michael Giannini, and Marcus Giannini. Honorary bearers will be all his Farmers' Electric Co-workers. Arrangements are under the direction of Chavez Funeral Home, 830 N. Fifth Street, Fort Sumner, NM. (575) 355-2311. To place an online tribute or sign the guest book go to www.chavezfuneralhome.com
To order memorial trees or send flowers to the family in memory of Glenn Holland, please visit our flower store.