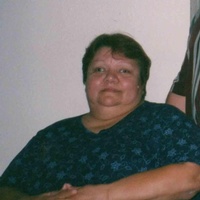 Gloria Ernestina Chavez, 63, of Belen, NM passed away peacefully surrounded by her family at Presbyterian Hospital in Albuquerque, NM on Wednesday, April 25, 2018. Gloria was born in Santa Rosa, NM to the home of Frank Marquez and Clarita (Sandoval) Marquez.  She attended school in Santa Rosa and later married Orlando Chavez in Los Lunas, NM on July 13, 2007.  Gloria made her home in Santa Rosa, NM, Las Vegas, NV, Albuquerque, NM, Roswell, NM and had lived in Belen since 2007.  Gloria worked in the hospitality industry as a housekeeper and in retail sales.  She also spent time working in the fields picking broom corn.  Gloria was also quite fond of writing family members and friends, and always remembered each of her friends and family with a birthday or Holiday card.  In addition, she was a parishioner at Our Lady of Belen Catholic Church in Belen, NM. Gloria is preceded in death by her parents, her sister; Linda Chavez, an infant brother; Paul Marquez, sister-in-law; Corrine Lopez and her father-in-law; Salomon Chavez. She is survived by her husband Orlando Chavez, of the family home, step-daughter; Monica Chavez of Puerto De Luna NM, brothers; David Marquez of Clovis, NM and Kenneth (Liza) Marquez of Albuquerque, NM and her mother-in-law; Rosa Chavez of Belen, NM.  Gloria will also be missed by a host of nieces, nephews and friends. Recitation of the Most Holy Rosary will be recited by Deacon Raul Grajeda at 7:00 P.M. on Friday, May 4 , 2018 at the chapel at Chavez Funeral Home in Santa Rosa, NM. Interment of cremains will be Saturday, May 5, 2018 at the Encino Catholic Cemetery in Encino, NM. All arrangements have been entrusted to Chavez Funeral Home, 923 S. Third St., Santa Rosa, NM.  (575) 472-3369.
To order memorial trees or send flowers to the family in memory of Gloria Ernestina Chavez, please visit our flower store.