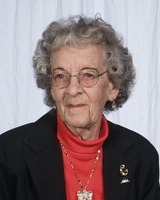 Goldie Opal (Roach) Jester, age 99, was born in Clovis, NM on September 18, 1922, to the home of Newton Lon and Gertrude (Dean) Roach of the community of Field. She passed from this life to the next life in the early hours of April 11, 2022. She attended school at Field graduating in 1940. She enjoyed sports and was on the school’s winning basketball team for several years. She never let her small stature stop her from doing whatever she wanted. After graduation she moved to Hamlin, TX, where her older sister lived and began attending business school. When World War II began, she answered the call to help on the Homefront and took off for California along with several from the Field community. She went to work for Douglas Aircraft, building the B-17 bombers. She was small enough to fit into the nose of the aircraft and was in charge of installing the gun sights. While building planes she met the love of her life, Joe Jester, and they were married on April 28, 1944 in Las Vegas, Nevada. After the war ended, they started a body shop and later had a lawnmower business. After retirement, they traveled the country visiting friends and relatives and enjoying our National Parks. They moved to Fort Sumner in 1988 and fell in love with the community. Goldie enjoyed work! Whatever she set out to do she did it the right way, Her way! She also enjoyed speaking to different groups about her work at Douglas Aircraft and became known as “Rosie the Riveter”. Goldie was preceded in death by her husband Joe Jester in 1999, two sisters Pearl Wilson, Minnie Clark, one brother Albert Roach and a step-daughter Betty Jo Evans. She is survived by a nephew Virgil Wilson (Glenda) of Fort Worth, TX, nieces Nyoka Heiden of Tucson, AZ, Judith Roach of El Paso, TX, and Gayle Nash of Field, NM. Visitation hours will be from 1pm to 6pm on Friday, April 15, 2022 at the Chavez Funeral Home. Funeral services will be held at 2:00 pm Saturday, April 16, 2022 at the First Baptist Church in Fort Sumner, NM with Rev. Jim Peabody and Dr. Joe Bunce officiating. Burial will follow in the Garden of Memory, Fort Sumner Cemetery. Pallbearers will be Abel Lopez, Virgil Wilson, Don Sweet, Nate Luna, Dale Dent, Darryl Roach, Gerryl Roach, Garrett Nash, and Joseph Nash. Honorary bearers are Dr. Mohammad Hassan, Dr. Jack Vick, Lorenzo Segura, Bob Addison and all her Fort Sumner friends. In lieu of flowers the family requests memorials to the First Baptist Church in Fort Sumner, NM or the charity of your choice. Arrangements are under the direction of Chavez Funeral Home, 830 N. Fifth Street, Fort Sumner, New Mexico. (575) 355-2311. To place an online tribute or sign the guest book, go to www.chavezfuneralhome.com
To order memorial trees or send flowers to the family in memory of Goldie Jester, please visit our flower store.