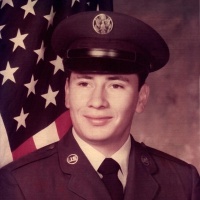 Graciano Garduño Jr. “JR”, 62, of Vaughn, NM, passed away on June 5th, 2019 at his home in Edgewood, NM. He was born in Vaughn, NM on March 11, 1957. He graduated from Vaughn High School and continued on to serve his country in the U.S. Air Force for six years. Graciano was married to his high school sweetheart Beatrice Anaya on July 24, 1975; they were married for 44 years.  After the military, he moved to Saugus, CA, where he began his career in telecommunications. He would go on to become a successful Technical Engineer with World Wide Technology Inc. Graciano is survived by his loving wife, Beatrice, his two sons, Vincent and Jonathan, and his daughter, Deanne. He is also survived by his brothers and sisters Francis, Sam, Mercy, and Steve, as well as multiple nieces and nephews. He adored his grandchildren Katherine and Evan Garduño.  It is up to a each of us to remember that no man or woman is an island. The roads of our lives will inevitably be paved with long dark nights of the soul, but we must remember that there will always be light just beyond the horizon. Graciano is at peace now, may he bask in Godʼs loving light knowing he will forever be cherished by those who carry his memory with them. To have known him was to love him, please keep him alive in your hearts and minds. Funeral services are scheduled for Wednesday, June 12, 2019 at 11:00 A.M. at the First Baptist Church in Vaughn, NM, with interment of cremains to follow at Evergreen Cemetery.  Services will be officiated by Pastor Roy Denton. All services have been entrusted to Chavez Funeral Home, 923 S. Third St., Santa Rosa, NM  88435.  575-472-3369.  To place an on-line tribute, please visit www.chavezfuneralhome.com
To order memorial trees or send flowers to the family in memory of Graciano Garduño, Jr., please visit our flower store.