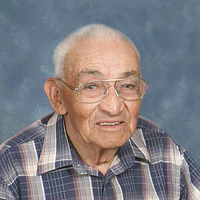 Guadalupe C. Gallegos, 93 of Fort Sumner, NM was born September 18, 1926 in Clovis, NM to the home of Merenciano and Manuelita (Chavez) Gallegos. He was raised by his grandfather in Encino, NM where he attended school. He worked as a sheepherder and farm worker in Estancia, NM until he moved to Clovis in 1946. He married Florinda Lucero on September 1, 1948 in Clovis. Guadalupe worked for Rierson Pontiac in Clovis for 10 years, he also worked for Chester Drummond for many years as a commercial building painter. He later worked at Sherwood Mortuary for two years. He retired in 1988 and made Fort Sumner his home in 1996. He continued to work as a handyman. Guadalupe and Flora were active members of St. Anthony Catholic Church in Fort Sumner. Guadalupe was preceded in death by his parents; his wife, Florinda Gallegos; a son, Jimmy George Gallegos; a daughter, Lucinda Camila Gallegos; a great-grandson, Malachi Gallegos; four brothers, Jose, Santiago, Leo and Richard Gallegos; and a sister, Maria Mares. He is survived by three sons; Guadalupe "J.R." Gallegos Jr. of Fort Sumner, NM , Merenciano Gallegos of Moore, OK, and Teodoro and his wife Shana of Clovis, NM; three daughters, Juanita Jones of Fort Sumner, NM, Ruby Titterude or Everman, TX, and Rose Mary Heldt and husband Craig of Clovis, NM; Also surviving are many grandchildren and great-grandchildren. Cremation has taken place. A graveside committal service was held at 9:00 am Friday, September 18, 2020 at St. Anthony Catholic Cemetery in Fort Sumner, NM with Father Sotero A. Sena officiating. Arrangements are under the direction of Chavez Funeral Home, 830 N. Fifth Street, Fort Sumner, New Mexico. (575) 355-2311.
To order memorial trees or send flowers to the family in memory of Guadalupe C. Gallegos, please visit our flower store.