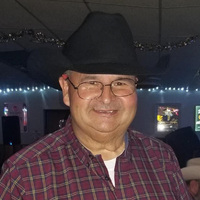 Henry “Hank” Cordova, 65 of Logan, NM, passed away Friday, July 15, 2022 in Amarillo, Texas. Henry was born on July 9, 1957 in Logan, NM to Juan Cordova and Tomasita (Ramirez) Cordova. Henry was raised in Logan, where he also attended school. Henry was active as a volunteer fire fighter with the Logan Fire Department, and honorably retired from his position. Henry was also a volunteer with Saint Anthony’s Catholic Church in Logan and with the Logan Public Schools. Furthermore, Henry was a member of the Knights of Columbus and of the Sons of the American Legion, where he often volunteered. Henry was an avid Raiders fan and he loved Spanish music and dancing. Henry also enjoyed traveling and spending time with his family and friends. Henry was a familiar face at all Logan Public Schools athletic events and was well-known by teachers and students in Logan. Henry was also the recipient of the Adult Sportsmanship Award for Class A in 2000. Henry is preceded in death by his parents and siblings: Juan Cordova, Jr., Dora Cordova, Victor Cordova and Carmen Garcia. Henry is survived by his siblings: Louisa Trujillo, Kate (Richard) Moore, Juanito Cordova—all of Logan, NM and Lawrence Cordova of Tucumcari, NM, as well as numerous nephews, nieces, cousins and his many friends. Visitation for family and friends will be Friday, July 22, 2022 from 9-10am at Saint Anthony’s Catholic Church in Logan, NM. Recitation of the Most Holy Rosary will begin at 10am followed by the Mass of Christian Burial at 11am at Saint Anthony’s, with Father John Paul Afuecheta officiating the service. Interment will follow at Logan Cemetery, in Logan, NM with Kevin Morrison, Bobby Calbert, Eddie Gutierrez, Ernest Cordova, Jimmy Moralez and Carlos Cardenas serving as Pallbearers. Honorary Pallbearers are: Mo Ramirez, Julie Cordova, Antonio Cordova, Tommy Cordova, Art Cordova, David Alexander, David Johnson, Joe Cordova, Mike Roberts, John Cordova, Ted Cordova, Skinny Hainson, Jimmy Ramirez and Ricky Bryant. Services are under the direction of Chavez Funeral Home, 923 S. Third St., Santa Rosa, NM 88435. 575-472-3369. To place an online condolence or tribute, please visit www.chavezfuneralhome.com.
To order memorial trees or send flowers to the family in memory of Henry "Hank" Cordova, please visit our flower store.