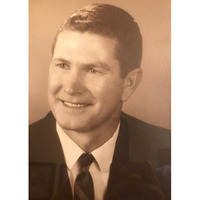 Herbert Martin, 90 passed away at his Lubbock, TX home on June 1, 2022. He was born September 15, 1931 in Taiban, New Mexico to the home of Samuel and Hazel (Hall) Martin. Herbert graduated from Fort Sumner High School in 1949. He married Mary Louise Walker on March 28, 1959 in Fort Sumner. They made their home in Roswell where Herbert worked as Market Manager for Piggly Wiggly, in 1973 they moved to Lubbock, TX where Herbert worked as District Manager for Shoprite Foods, Herbert owned and operated Plains Meat Company in Lubbock. Herbert is preceded in death by his wife Mary Martin in 2009, his father Sam Martin in 1969, his mother Hazel Martin Carr in 2001, two sisters Ernestine Hagerman and Norma Lee Wood, and a brother George Martin. Survivors include a son Howell Martin and his wife Peggy of Wichita Falls, TX, two grandchildren, Michael Martin and his wife Allyssa and Laura Martin Schlager and her husband Justin along with 3 great-grandchildren. A Graveside Service and Interment will be held at 11:00 am, Monday, June 20, 2022 at Fort Sumner Cemetery in Fort Sumner, NM with Reverend Sam Lanham officiating. In memory of Herbert Martin, please donate to the Meat Science Scholarship in Memory of Herbert Martin, Davis College General Scholarship fund. Memorial gifts can be made online by clicking the following giving link: https://securelb.imodules.com/s/1422/20/form.aspx?sid=1422&gid=1003&pgid=3207&cid=8425&bledit=1&dids=608sent. Please designate in the tribute section online that it is in memory of Herbert Martin. Gifts can also be mailed to Davis College of Agricultural Sciences and Natural Resources, Box 42123, Lubbock, Texas 79409-2123. Checks should be made payable to the Texas Tech Foundation. In the memo section of the check or on separate note put in memory of Herbert Martin. This scholarship will select meat science students (meat production, packing, etc.) for this award. Funeral arrangements are under the direction of Chavez Funeral Home, 830 N. Fifth Street, Fort Sumner, New Mexico. (575) 355-2311.
To order memorial trees or send flowers to the family in memory of Herbert Martin, please visit our flower store.