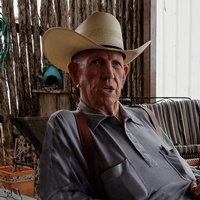 Jim H. Fox, 78 of Fort Sumner passed away at his home on Friday, August 17, 2018 following an illness. Jim was born May 7, 1940 in Fort Sumner to the home of J.D. and Ada Mae (Savage) Fox. He attended school at Taiban until the 6th grade. He graduated from Fort Sumner High School in 1959. While in high school he participated in sports and excelled in track and rodeo. He held the track record for the 440 yard dash at Las Vegas, NM and the 100 yard dash at Clovis. He was a NM High School bareback horse riding champion. He later traveled the amateur circuit across the country and won the Bull Dogging championship in Randolph, Wisconsin.Following graduation from high school, Jim worked in Fields, NM planting wheat, he returned to Fort Sumner where he worked with his father as a heavy equipment operator. Jim also farmed in the Fort Sumner valley. He later worked for a custom harvester cutting silage in the Clovis area. For many years Jim was a truck driver. He hauled milk across the country and was proud that he never had an accident in over one million miles of driving. According to Jim, the worst truck trip was into Turkey, PA where there was no truck by pass and it seemed like 900 stop lights all with a load of milk. Of all his years of driving, Jim said the town he liked the best was Lamass, Iowa.Jim worked for Serna Construction as a construction superintendent on the highway to Cuba, NM. He later worked on the Big I in Albuquerque and hauled the first load of dirt on this project. Jim became the Safety Road Assistance driver on the Big I project. He drove around the Big I all day and assisted motorist with vehicle problems and provided traffic control in the event of an accident. Jim was a lifelong supporter of rodeo and with his daughter Jimmie Dee worked many hours to secure financial sponsorship's, buckles, and hats to promote the Old Fort Days Rodeo.  Jim also loved race horses and enjoyed visiting the race tracks across New Mexico. He was proud to be the co owner of Lonnie Ton a racehorse that won the Road Runner Handicap at Ruidoso Downs in 2015.Jim enjoyed fishing and dancing. During a recent visit Jim said he lived a "Darn Good Life".Jim is preceded in death by his parents, a daughter Jimmie Dee Fox on May 14, 2013, his sister Cloreta Hawk in 2013, and a brother Owen O. Fox in 2001.Jim is survived by a sister Maurcenia Cross and husband Gary of Fort Sumner, a step daughter Robbie Andes of Portales, a cousin Cathy Dewbre of Fort Sumner, two nephews Olen Douglas and wife LaTonne of Amarillo, TX, and Eddy Douglas of Arkansas, one niece D'Aun Thorne of Aiken, South Carolina, and six great nieces and nephews along with a host of friends.Visitation hours will be Monday, August 20, 2018 from 1pm to 6pm at Chavez Funeral Home in Fort Sumner. Funeral services will be held at 11:00 am Tuesday, August 21, 2018 at The Church on The Hill with Pastor Anna Teeter-Gentile officiating. Burial will follow in the Fox family plot, Fort Sumner Cemetery. Pallbearers will be Norbert Herrera, Benny Madrid, Glyn Griffin, Ryan Griffin, Cody Mobley, Jerry Sharp, Weldon Austin, and Dennis Chavez. Honorary bearers will include Billy Long, Richard Ford, Dwayne Ridley and all his many friends.Arrangements are under the direction of Chavez Funeral Home, 830 N. Fifth Street, Fort Sumner, New Mexico. (575) 355-2311.
To order memorial trees or send flowers to the family in memory of Jim H Fox, please visit our flower store.