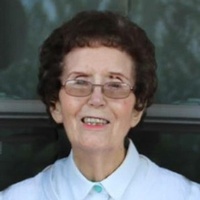 Jo Ann Duke, 83 of Fort Sumner passed away Friday, August 17, 2018 at her home following an illness. Jo Ann was born in Fletcher, Oklahoma on October 24, 1934 to the home of George Dudley Hutson and the former Margaret Adeline Barker. She grew up in Oklahoma and at age 15 moved to the Johnson-Kyle Ranch south of Santa Rosa. She moved to Fort Sumner where she completed and graduated from Fort Sumner High School in 1953. Jo Ann married Bill Duke on November 21, 1954 in Fort Sumner. They were married 63 years.Jo Ann worked at the Fort Sumner Schools Business Administrator for 39 years, retiring in 2005. She was a Dallas Cowboy's fan and loved watching them play. She also enjoyed watching golf on TV and her favorite golfer was Tiger Woods. Jo Ann and Bill participated in bowling leagues in Fort Sumner for many years. Jo Ann also belonged to WIBC and she traveled to bowl in several leagues and tournaments. She was a member of a bridge league in Fort Sumner and a longtime member of First Baptist Church in Fort Sumner. Following retirement, Jo Ann enjoyed vacationing in Ruidoso and Red River with her family, spending time with her grandchildren, and attending family reunions in Oklahoma every year.Jo Ann is preceded in death by her parents, her husband Bill Duke on August 25, 2017, a daughter Beth Sparks on May 21, 2013, siblings Georgia Fey, J.D. Hutson, Pete Hutson, Russell Hutson, Mary and Francis.Jo Ann was a devoted and loving wife, mother, and grandmother she is survived by a son John Duke and wife Barbara of Fort Sumner, sisters Barbara Catherwood, and Marie Crow both of Oklahoma, and a brother Bill Hutson and his wife Gladys of Florida. Also surviving are grandchildren Wendy Abeyta and husband Josh of Clovis, John Wylie and wife Jessica of Kansas, Marla Lewis and husband Kolter of Portales, and Brandan Duke of Portales. two great-granddaughters Autumn Long of Fort Sumner and Viola of Kansas, along with numerous nieces, nephews, other relatives and many friends. The family will receive friends on Monday and Tuesday from 1pm-4pm at the Duke family home, 1081 Whinnery Avenue in Fort Sumner.Viewing and visitation hours will be Tuesday from 1pm to 6pm at the Chavez Funeral Home.Funeral services will be held at 10:00 am Wednesday, August 22, 2018 at the Chavez Funeral Home Chapel, 830 N. Fifth Street, Fort Sumner, NM with Rev. Jim Peabody officiating. Burial will follow in the Duke family plot, Fort Sumner Cemetery. Pallbearers will include Brandan Duke, Kolter Lewis, John Wylie, Lecil Richards, Kenneth Taber, Louie Gallegos, and Bob Addison.All arrangements are under the direction of Chavez Funeral Home in Fort Sumner, NM. (575) 355-2311.
To order memorial trees or send flowers to the family in memory of Jo Ann Duke, please visit our flower store.