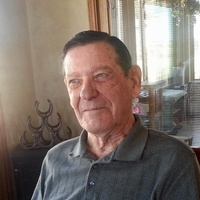 Graveside services with military honors will be held at 10:00 am Saturday, January 26, 2019 at Fort Sumner Cemetery with Anna Teeter-Gentile officiating.  Joe Cox, 82 a longtime Taiban, NM resident passed away Thursday, December 13, 2018 in Yeso, NM following an illness. Joe was born May 6, 1936 in Philadelphia, Mississippi to the home of Bassett and Claudie E. (Luke) Cox. He grew up in Philadelphia where he attended and graduated from Dixon High School in 1954. Joe worked in law enforcement for the majority of his working life including 5 years in Philadelphia, several years with the New Mexico State Police, stationed at Grants, NM, and five years in De Baca County. While serving in Philadelphia he was shot in the back while on duty. The injury caused the loss of a lung. Joe moved to New Mexico at this time. Joe married Kay Knoblock on September 3, 1977 in Fort Sumner. Joe operated the Exxon station at the corner of Sumner Avenue and Fourth Street. He also worked for several years as a truck driver for Furr's Grocery until his retirement in 1989. Following his retirement he and Kay made their home in Taiban. Together they opened and operated the Taiban Trading Post for several years.  Joe also served in the U.S. Air Force, he enlisted on August 25, 1954. His primary duties were Jet Engine Mechanic. He served during the Berlin Crisis of 1961-62. His military career took him across the globe to several U.S. Air Force Bases. He was stationed at Cannon Air Force Base where he was a mechanic on the B47. Joe was honorably discharged with the rank of Staff Sergeant on August 24, 1962. Joe enjoyed horse racing, he owned race horses and traveled across NM to the different race tracks. He also loved to buy and sell real estate, enjoyed the area history and loved watching the Tennessee Volunteers, basketball and football games.  For the past two years, with his declining health, Joe moved to Yeso with his daughter and son in law, Marikay and J.O. Achen. He always enjoyed the time he spent with his family. Joe was a proud member for 51 years of the Scottish Rite of Free Masonry, and a member of Mount Moriah Masonic Lodge #54 in Fort Sumner. Joe is preceded in death by his wife Kay Cox in 2006, his parents, a sister Barbara Nowell of Hattisbury, MS, and a son-in-law Robert Mowery of Carryville, TN. Survivors include a daughter Marikay Achen and husband J. O. of Yeso, step daughter Carolyn Mowery of Carryville, TN, a son Joe Ryan Samora (Angela Urban) of Clovis, NM, grandchildren Casey Achen and wife Aspen of Yeso, Kayla Achen of Albuquerque, Ethan and Alexandria Samora of Oahu, Hawaii, and one great-grandchild Rylee Achen of Yeso. Also surviving are two brothers, Jack (Evelyn) Cox, Brandon, MS, Gary Cox Philadelphia, MS and one sister, Pam Hardy Philadelphia, MS along with six nephews and nieces, Michael (Amber) Cox and son Tyler of Terry, MS, Chris (Alicia) Noble and Daughter Ava of South Haven, MS, Ashleigh Noble of Brandon, MS, Carmen Hardy (Grant) Ford of Hattiesburg, MS,  Deanna Hardy of Philadelphia, MS, and Penny Nowell of Shreveport, Louisiana.  Cremation has taken place. Arrangements are under the direction of Chavez Funeral Home, 830 N. Fifth Street, Fort Sumner, New Mexico. (575) 355-2311
To order memorial trees or send flowers to the family in memory of Joe Cox, please visit our flower store.