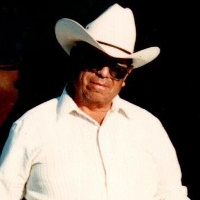 Joe M. Gomez, 90 of Santa Rosa, NM passed away peacefully at his home, surrounded by his loving family on Monday, June, 3, 2019. Joe was born on August 25, 1928 in Indio, California to the home of Anselmo Gomez and the former Dorotea Benevidez, and was reared in Cuervo, NM where he also attended school.  Eager to begin work, at the age of 9, Joe boarded a train in Cuervo and traveled to Kansas where he worked on a farm for two years.  He then returned to New Mexico where he began work as a cowboy for several area ranches.  He worked for Buster Driggers, the Cabra Springs Ranch, the Mora Ranch, he worked for B.F. Walker on the Agua Negra Ranch, for W. O. Culbertson on the Park Springs Ranch and for Billy Shepard on the Lazy 3 Bar Ranch.  After many years of ranching Joe retired in 1999 from the Lazy 3 Bar Ranch.  During his long ranch career, Joe met and married the former Isabel Roybal on March 7, 1949 in Trujillo, NM. A devoted parishioner of St. Rose of Lima Catholic Church, Joe prayed the rosary daily in devotion to our Lord.  In his spare time, Joe enjoyed roping and dancing, but was particularly fond of the time he spent with his family and friends.  He also enjoyed cruising in his black Ford pickup. Joe is preceded in death by his half-sister; Enriqua Marquez, half-brothers; Raymond Vigil and Rudy Vigil, his brother; Salomon Gomez and sister; Amalia Gomez. Joe is survived by his wife of 70 years; Isabel Gomez of the family home in Santa Rosa, daughter; Barbara White of Santa Rosa, granddaughters; Shantiana White and Triana White, both of Santa Rosa.  He is also survived by his half-sisters; Virginia Campos, Liz Apodaca and Bertha Vigil, Vangie Quintana, Fidelia Grooms, and his half-brothers; Steve Vigil and Tito Vigil. Recitation of the Most Holy Rosary will be Thursday, June 6, 2019 at 6:00 P.M. at St. Rose of Lima Catholic Church in Santa Rosa.  The Mass of Christian Burial will be celebrated at 10:00 A.M. on Friday, June 7, 2019 at St. Rose of Lima, officiated by Father Christopher Bernabe. Serving as pallbearers will be Carlos Romero, Guy Don Cribbs, Larry Marquez, Michael Marquez, John Chavez, and Robert Esquibel.  Interment will follow at Saint Joseph Cemetery in Santa Rosa. All services have been entrusted to Chavez Funeral Home, 923 S. Third St., Santa Rosa, NM  88435.  575-472-3369.  To place an on-line tribute, please visit www.chavezfuneralhome.com
To order memorial trees or send flowers to the family in memory of Joe M. Gomez, please visit our flower store.