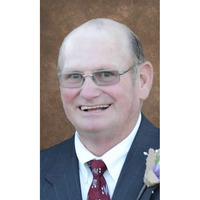 Johnny Wayne Williamson, 77 a resident of the Fort Sumner valley passed away Saturday, November 26, 2022 at Prairie Acres Nursing Home in Friona, Texas following an extended illness. Johnny was born November 15, 1945 in Clovis, NM to the home of John Floyd and Norma Lucille (Borden) Williamson. Johnny attended schools in Clovis and graduated from Clovis High School in 1964. During the fall of 1964, Johnny told his Grandma Bessie that he was going to marry a pretty girl after seeing her when she was working at West Refrigeration. In fact, he never asked that pretty girl to marry him, he simply told her to “set the date” and so she did, and he married Anita Jane Prather on November 15, 1964 in Clovis, NM. They made their home in Fort Sumner in January 1965. Johnny and Anita welcomed sons, Bobby in July 1967 and Larry in January 1971. Johnny worked for the U.S. Government for three years as a surveyor. During this time, he remembered dragging chains to create corners for section markers. After this, he began a career working at Fort Sumner Auto/Ford Garage for Flea Wood. Over the course of 27 years, he worked as a mechanic and established a reputation for his mechanic knowledge and doing things right. After the Ford Garage burned, Johnny spent his time helping take care of his grandkids and working to build Williamson Goats with his son Bobby. Johnny was a member of the original EMT’s formed in Fort Sumner. He also served as a volunteer for the Village Fire Department, ran the Bowling Alley several years, and was a past member of the Jaycees. Johnny was a member of the Fort Sumner Church of Christ. He is preceded in death by his maternal grandparents Floyd and Bessie Borden, father John Floyd Williamson and mother Norma Lucille (Borden) Crim, and his mother and father-in-law Bob and Sis Prather. Johnny is survived by his loving wife of 58 years, Anita Jane Prather Williamson, son Bobby and wife Angie Williamson of Fort Sumner, son Larry and wife Wendy Williamson of Fort Sumner, grandson Brenton Williamson of Fort Sumner, grandson Barrett Williamson of Portales, granddaughter Britney and husband Will Watts of Elida, granddaughter Rae-anne Williamson of Stillwater, OK and grandson Chase Williamson of Portales. Also surviving are seven great grandchildren, Braxton, Bryant and Brooklye Williamson, Preston and Paislee Williamson, and Bentley and Baylee Watts. Johnny was also survived by brothers Danny Williamson and Floyd Dwayne Williamson of Texas and numerous extended family and friends. Graveside services will be held at 2:00 PM Tuesday, November 29, 2022 in the Williamson family plot, Fort Sumner Cemetery with Mr. Powhatan Carter officiating. Pallbearers will include Moe Berry, Jerry Sparks, Brenton Williamson, Barrett Williamson, Britney Watts, Rae-anne Williamson, Chase Williamson, and Will Watts. Honorary bearers will all his family and friends. The family requests contributions in memory of Johnny Williamson to Fort Sumner Cemetery Association, P. O. Box 180, Fort Sumner, New Mexico 88119. Arrangements are under the direction of Chavez Funeral Home, 830 N. Fifth Street, Fort Sumner, NM. (575) 355-2311.
To order memorial trees or send flowers to the family in memory of Johnny Williamson, please visit our flower store.