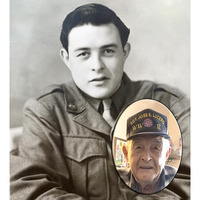 Jose Elijio Lucero, 92 of Encino, NM passed away Thursday evening, August 11, 2022 at Bee Hive Homes in Edgewood, NM. He was born August 24, 1929 in Palma, NM, grew up in Plaza Vieja, south of Palma, NM. He moved to Encino as a young boy with his parents, Jose and Eva (Jaramillo) Rivera. Jose married Emma Chavez on November 4, 1950 in Encino. They made their home in Encino until they moved to Bee Hive Homes in Edgewood in 2017. Jose is a U.S. Air Force veteran, he served 3 years including 30 months in Japan 1946,1947,1948. Jose worked for BNSF Railroad for many years. He retired as Track Supervisor on July 31, 1989. He was a member of Maintenance of Way Union, American Legion Post #53 in Vaughn. He enjoyed playing pool, horseshoes, dominos, woodworking, camping, deer and elk hunting, and arrowhead hunting. Jose is preceded in death by his parents, Jose C. Rivera & Eva Jaramillo Rivera, his wife of 70 years, Emma C. Lucero in 2020, a son Junior Lucero in 1998, and three brothers, Robert Rivera, Evaristo Rivera, and Ismael Rivera. Survivors include a daughter Christine Perea of Albuquerque, a Son Ernest Lucero and his wife Brenda of Clovis, a Brother Adan Rivera and wife Juanita, of Silver City, NM, and a sister Oralia Archibeque of Gypsum, Colorado. Also surviving are four grandchildren, Felicity Narvaiz (Press) of Rio Rancho, Emmanuel Lucero of Clovis, Joseph Lucero (Tracy) of Albuquerque, and Melanie Perea of Ruidoso along with four great-grandchildren and many nieces, nephews other relatives and many friends. Viewing and Visitation for family and friends will be held at Our Lady of Guadalupe Catholic Church in Encino, NM from 9:30am to 10am on Wednesday, August 17, 2022. Holy rosary will be recited at 10:00 am followed by the funeral Mass with Father Tim Meurer officiating. Interment will be at Our Lady of Guadalupe Cemetery with military honors provided by Vaughn American Legion Post #53. Pallbearers will include Emmanuel Lucero, Joseph Lucero, Kolton Lucero, Croix Parker, Tito Chavez, and Joey Rivera. Honorary bearers will include Alex Buel, Patrick Garcia, Gary Archuleta, Marty Rivera, Bill Rivera, Robbie Chavez, Jasmine Lucero, Braylon Lucero, and Samantha Houstin. Arrangements are under the direction of Chavez Funeral Home, 830 N. Fifth Street, Fort Sumner, New Mexico. (575) 355-2311.
To order memorial trees or send flowers to the family in memory of Jose Elijio Lucero, please visit our flower store.

Our Lady of Guadalupe - Encino