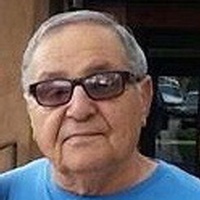 Jose L.R. "Bobby" Marquez , 70,  of Albuquerque, NM went to be with the Lord on July 29, 2018. His brother Rudy and Doris were at his side. Bobby was born on January 25, 1948 to proud parents, Roberto and Frances Marquez. He attended Santa Rosa High School and graduated in 1966. He married Regina Sexton on February 8, 1969  . From their union were born two daughters, Rozanne and Yvonne. Bobby was a U.S Army veteran and served in Vietnam. During his lifetime, he held different jobs. He ended up in Albuquerque, and landed a job with the Department of Defense. He retired from there several years ago. Bobby had a quirky sense of humor. He could be perfectly serious, then crack a joke or make a smart remark and keep us laughing. Bobby loved cooking for himself and loved Mexican food. Bobby is survived by his two daughters, Rozanne and Yvonne, four grandchildren and one great-grandson. He leaves behind his sister, Nora (Jim) Romero, two brothers, Gilbert and Rudy (Doris) Marquez  and several nephews, nieces, many cousins, as well as two aunts, Otilia Muniz and Alice Armijo. He loved us all. Bobby is preceded in death by his parents, Roberto and Frances Marquez, his wife Regina and little infant daughter Denise. Also preceding him in death are his father and mother-in-law Ray and Catherine Sexton. Bobby will be sorely missed by all his loved ones.  We will miss his jokes and all the laughter he brought into our lives. Serving as Pallbearers are; Rudy Marquez, Gilbert Marquez, Jim Romero, Manuel Madrid, Joey Muniz and Nathaniel Madrid. Services will be held Friday, August 3, 2018 at Nuestra Senora del Refugio Catholic Church in Puerto De Luna, NM.  Viewing will begin at 9am with recitation of the Most Holy Rosary at 10:00 A.M, followed by the eulogy and Mass of Christian Burial. Interment will follow at Saint Joseph Cemetery in Santa Rosa, NM. Following the burial a funeral reception will be held at the Knights of Columbus Hall in Santa Rosa. The family thanks everyone for their love and support during this very difficult time.All services have been entrusted to Chavez Funeral Home, 923 S. Third St., Santa Rosa, NM. (575) 472-3369.
To order memorial trees or send flowers to the family in memory of Jose L.R. Marquez, please visit our flower store.