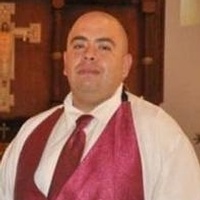 Julian Velasquez, 40, of Santa Rosa, NM passed away unexpectedly at his home on Thursday, July 26, 2018. Julian was born on September 27, 1977 in Ft. Sumner, NM to the home of Jimmy Velasquez and Francis (Micelli) Gallegos.  He was reared in Santa Rosa, where he attended school and subsequently earned his GED. Julian made his home in Santa Rosa with his wife Berna and children Alyssa and Adan.  He was a Certified Corrections Officer and was currently the Food Service Production Manager at GEO facility.  A devout husband, father and Christian, Julian was a parishioner at Saint Rose of Lima Catholic Church.  Always willing to help his community, Julian was a Fire Fighter with the Santa Rosa Volunteer Fire Department, a Little League Board Member and coach, as well as a member of the Softball League. Julian enjoyed BBQing-so much so, that he was known for his “V’s” BBQ stand at the Guadalupe County Fair, he enjoyed fixing his ’70 Chevy C10, and was particularly known for his desire to lend a helping hand to anyone in need.  In terms of sports, Julian was an avid Lions and Steelers fan.  To anyone who knew him, they will remember him saying “I got you!” Julian is preceded in death by his father; Jimmy Velasquez, paternal grandparents; Arthur and Esmeralda Velasquez, maternal grandmother; Ramona Micelli and great-grandmother; Encarnacion Madrid. Julian is survived by his wife Berna Velasquez, daughter; Alyssa Velasquez and son; Adan Velasquez—all of Santa Rosa.  He is also survived by his mother; Francis Gallegos and step-father; Frank Gallegos, father and mother-in-law; Herman and Violet Abeyta, brother and sister-in-law; Julie Abeyta and Ben Rael, Goddaughters; Madyson Rael and Araya Baca, Godsons; Julien Rael and Lorenzo Garcia, as well as numerous relatives and friends. Recitation of the Most Holy Rosary will be said on Wednesday, August 1, 2018 at 7:00 P.M. from Saint Rose of Lima Catholic Church.  The Mass of Christian Burial will be on Thursday, August 2, 2018 at 10:00 A.M. at Saint Rose, with Father Christopher Bernabe officiating.  Interment will follow at Nuestra Senora del Refugio in Puerto de Luna. Visitation will be Tuesday, July 31, 2018 from 1:00 P.M. to 5:30 P.M. at Chavez Funeral Home in Santa Rosa. Serving as Pallbearers are; Gilbert Baca, Jeff Chavez, Moises Gallegos, Cedric Gauna, Carlos Gonzales, Porfirio Mancha, Jr., Mark Micelli, John Montoya, Devin Phillips, Ben Rael, Gilbert Romero and Larry Roybal.  Honorary Pallbearers are his Godchildren; Julien Rael, Lorenzo Garcia, Araya Baca and GEO colleagues. All arrangements have been entrusted to Chavez Funeral Home, 923 S. Third St., Santa Rosa, NM  88435
To order memorial trees or send flowers to the family in memory of Julian "V" Velasquez, please visit our flower store.