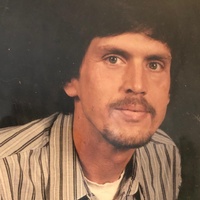 Kevin Wood, 58 of Fort Sumner, NM passed away Saturday, December 29, 2018 at his home. He was born September 9, 1960 in Harvard, Illinois to the home of Eldon and Mabel Jean (Olson) Wood. He grew up in Harvard where he attended school. He moved with his family to Fort Sumner in 1976 where he attended and graduated from high school. Kevin worked for several years at Spouts' Cafe and also worked as a farm laborer loading hay trucks in the Fort Sumner valley. He married Theresa Romero on December 13, 1986 at The Church on The Hill in Fort Sumner.  Kevin enjoyed playing his guitar, while in high school he was in a band, he also enjoyed listening to music, and watching action movies. Kevin is preceded in death by his parents, and a brother Tommy Wood, and a nephew Randy Romero. Survivors include his wife Theresa Wood, a daughter Angela Wood, two grandchildren Hanna and Ava Kelsey all of Fort Sumner and one brother Brian Wood and his wife Lori of Albuquerque along with numerous nieces, nephews, other relatives and friends. Memorial services will be held at 2:00 pm Monday, January 7, 2019 at The Church on The Hill with Pastor Anna Teeter-Gentile officiating. Arrangements are under the direction of Chavez Funeral Home, 830 N. Fifth Street, Fort Sumner, New Mexico.
To order memorial trees or send flowers to the family in memory of Kevin J. Wood, please visit our flower store.