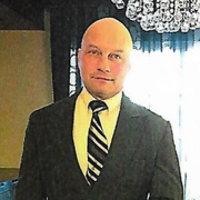 Russell Lance Miller was born in Kearney, Nebraska. From the very beginning of his life, his intelligence, humor, and originality were clear. He was a graduate of Pioneer Pleasant Vale High School in Waukomis, Oklahoma. He graduated summa cum laude from Southwestern Oklahoma State University. He was Valedictorian of his law class from Salmon Chase Law School.   Lance served his nation in the US military, enlisting in the Army Reserve at age 17. He rose through the ranks to Major. He was first in his class in JAG school. He retired from the Army’s Judge Advocate General’s Corps in 2007. His last assignment to the JAG Corps was as Chief of Military Justice for the 101st Airborne Division, and Fort Campbell. From 2007-2012, he was in private practice as a criminal defense attorney in Clarksville, Tennessee.   At the time of his death, he was Chief Deputy District Attorney for the 4th Judicial District Attorney’s Office in Santa Rosa, New Mexico. Lance was particularly distinguished in his prosecution work. He was hard working, competitive and lived with intensity.   He was overjoyed to be the father of Bruce and Clark Miller, and he was devoted to his dear wife, Fritzie Miller. Lance is also survived by his adult sons, Kory and Cary Miller, his parents, Tracey and Sandra Miller, of Angel Fire, New Mexico, and his sister, Laurie Newman, of Portland, Oregon, two nephews Alexander Vischer and Aaron Vischer all of Portland, Oregon.   Memorial Service will take place on Saturday, January 4, 2020, at 10 a.m. from St. Michaels Episcopal Church in Tucumcari, NM with Father Mark Lake officiating. Burial of cremains will take place in the summer at Monte Vista Cemetery in Angel Fire, NM.   Arrangements are under the care of Chavez Funeral Home, 923 S. Third Street, Santa Rosa, New Mexico. (575) 472-3369.
To order memorial trees or send flowers to the family in memory of Lance Miller, please visit our flower store.