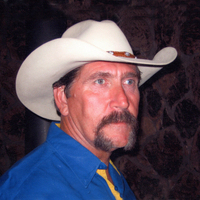 Larry Wayne Hinsely, Age 64, of McAlister, NM passed away on September 29, 2020. Larry was born July 26, 1956 in Houston, Texas to the home of Herman Wayne Hinsely and the former Betty Colleen Kelly. He grew up and attended schools in Houston, TX. He married Dorothy L. Meyer in Conroe, Texas on March 1, 1985. Larry worked many jobs over the years including being a crane operator for building construction in Houston, Texas. He owned and operated Lone Star tree removal service in Conroe, Texas. Larry also owned and operated Lone Star Glass in Conroe, Texas for 12 years as worked as a millwright for Louisiana Pacific Lumber. He was a lifelong horse trainer. Larry made his home in McAlister in May of 2006. His hobbies were hunting, he was a talented gunsmith and loved horses. Larry worked for several years as an actor and was featured in many western movies as a extra. Larry is preceded in death by his parents; a son, Joshua Hinsley in 2018; a daughter Heather Jennings in 2015; and two brothers, Danny Ray Hinsley and Michael Hinsley. He is survived by his wife Dorothy Hinsley of the family home of McAlister, NM; a step-daughter, Kim Lyon of Tioga, Texas; a grand-daughter, Summer Jennings of Tucumcari, New Mexico; a brother, David Hinsley of Conroe, Texas; two sisters, Sheryl Martin and Donna Hinsley. Graveside Services and burial will take place at Browning Cemetery in McAlister, New Mexico. His family and friends will serve as pallbearers. The Hinsley family regrets that the services are not open to the public due to the statewide restrictions pertaining to the COVID-19 Virus. In cooperation with the Governor’s order, services are limited to the immediate family. However, the family does kindly ask that you keep them in your thoughts and prayers. Please leave a note of condolence, a favorite memory, or sign the online guestbook at www.chavezfuneralhome.com Arrangements are under the direction of Chavez Funeral Home, 830 N. Fifth Street, Fort Sumner, New Mexico. (575) 355-2311.
To order memorial trees or send flowers to the family in memory of Larry Wayne Hinsley, please visit our flower store.