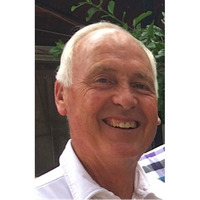 Celebration of Life for Lecil Richards will be held at 2:00 pm Saturday, June 26, 2021 at Fort Sumner High School Gymnasium, Fort Sumner, New Mexico with Mr. Silas Shotwell, pastor of Fort Sumner Church of Christ officiating. ** To watch a livestream of the Celebration of Life, click the link here** https://livestream.com/accounts/2421004/events/9733993 Lecil Richards, age 69, of Fort Sumner, NM lost his courageous battle with cancer on April 14, 2020. Lecil was born February 6, 1951, a beloved son, husband, dad, and brother. He graduated from Roswell High School and was a standout Football, Basketball, and Baseball player for the Coyotes. He received his Bachelors Degree in Education from Lubbock Christian College and obtained a Masters Degree from Eastern New Mexico University, later earning another Masters in Education Administration. Lecil met the love of his life, Pam Isler, at Eastern New Mexico University and they married in 1975. They celebrated 45 years of marriage on March 16th. Lecil taught and coached at Dora High School and Lovington High School. He eventually served as Assistant High School Principal, Elementary Principal, and then advanced to Assistant Superintendent, all in Lovington. After 19 years he moved his family to Fort Sumner, NM. His long time dream was to be Superintendent of a small school so that he would know every single student’s name from kindergarten through high school. He came to Fort Sumner with a vision for the school and joined forces with Mario Martinez and many others to make that vision a reality. After 14 years in Fort Sumner, he decided it was time to retire; he lasted 6 months, and then became Superintendent of House Schools. He retired from House after 7 years. He loved both schools, the teachers, the community, but especially the students. His favorite question was, “Is it the best thing for the students?” Lecil is survived by his wife, Pam Richards of the home in Fort Sumner and three sons Jerrett Richards of Ft Sumner, Jace & Audra Richards of Athens, Georgia, and Jaben & Savannah Richards of Nambe, NM. He is also survived by his three grandchildren Raden Lecil, Ruby Rose, and Roxanna Wren Richards. Lecil is the son of Marion Richards (deceased) and Mary Jo Richards of Lubbock, TX. His siblings are Damon Richards & Ashley, Quata Richards, and RL & Christy Richards all of Lubbock, TX. He is also survived by many in-laws, cousins, Aunts, Uncles, Nieces, and Nephews and friends. Lecil was an incredible human being with a unique ability to make everyone feel special. He always exhibited a kind and gentle spirit. He is known for the nicknames he gave the students and the High Fives he gave elementary students. He had an uncanny ability to understand when people needed affirmation and never hesitated to build them up in his own quiet way. He was the Starter for track meets and somehow knew the competitors names, teasing them, and encouraging them. Parents continually expressed gratitude on his ability to make them all feel important. Lecil had an unshakable faith and love of God that was unparalleled. As believers in God, the family knows with absolute certainty that God welcomed him to heaven with the words, “Job well done, good and faithful servant”. He was a ‘one of a kind’ and will be missed greatly. In lieu of flowers, it was Lecil’s wish that donations be made to: EPAC Scholarship Fund @ P.O. Box 847 Portales, NM 88130 Or the charity of your choice. To leave a tribute, share a memory or sign the online guestbook go to www.chavezfuneralhome. Arrangements are under the direction of Chavez Funeral Home, 830 N. Fifth Street, Fort Sumner, NM. (575) 355-2311.
To order memorial trees or send flowers to the family in memory of Lecil Richards, please visit our flower store.