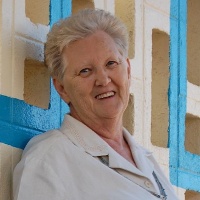 Leona Ann Wood, 76, passed away in Fort Sumner Thursday evening, June 20, 2019 following an extended illness. Her family was at her bedside. Leona was born in Fort Sumner, NM on February 27, 1943 to the home of Lester Hay Propps and the former Frances Ella Wilson. She grew up in Fort Sumner and attended Fort Sumner Schools graduating in 1963. Leona worked for over 25 years as a custodian for the U.S. Post Office in Fort Sumner, she was also elected and served for 12 years as De Baca County Probate Judge. She also worked several years as the Fort Sumner Senior Citizens Site Manager. Leona was a member of the First Baptist Church, the Merry Homemakers, a board member of the Valley Community House, and a past member of the Fort Sumner Housing Authority Board. She enjoyed gardening and according to her daughters, had a green thumb. She also enjoyed baking, cross stitch, listening to music, especially Elvis Presley.  Leona is preceded in death by her parents, a son Michael Eugene Wood in 1971, a brother Gary Propps, and two sisters Nola Gammill, and Patsy Gomez. A loving mother, grandmother, sister, and aunt, Leona will be remembered by her family as "Aunt Lee Grandma". Survivors include her two daughters Sherri McDaniel and husband Randy of Lubbock, TX, Heather Davenport and husband Scott of Fort Sumner, two granddaughters Megan McDaniel of Fort Worth, and Sidney "Sissy" McDaniel of Lubbock. Also surviving are two brothers Dale Propps and Vance "V.E." Propps and his wife Lori, all of Fort Sumner along with several nieces, nephews, other relatives many friends and her fur baby, Sugar Bear. Funeral services will be held at 10:00 am Monday, June 24, 2019 in the Chavez Funeral Home Chapel with Anna Teeter-Gentile officiating. Burial will follow at Fort Sumner Cemetery. Pallbearers will include Paul Propps, Gordon Morris, Scott Morris, Johnny Neal Eastwood, Bryan Arroyo, Walter Marler, and Jeremy Propps. Honorary bearers will include Chris Koytek, Will Quiroz, Kenneth Holcomb, Hoyt Barclay Robert Barclay, and Kenneth Holcomb Jr. Arrangements are under the direction of Chavez Funeral Home, 830 N. Fifth Street, Fort Sumner, NM. (575) 355-2311.
To order memorial trees or send flowers to the family in memory of Leona Wood, please visit our flower store.