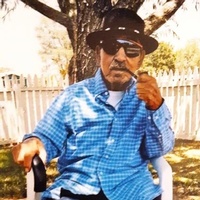 Leonires Jose Sena, 86 of Clovis, New Mexico passed away Tuesday, January 29, 2019 at his daughter's home in Albuquerque. Leonires was born January 7, 1933 in Alamo, NM north of Lake Sumner to the home of Alfredo and Cruzita (Aragon) Sena. He attended schools in Fort Sumner.   Leonires worked for many years in road construction as a truck driver for K Barnett Construction. In his younger years he worked for the Santa Fe Railroad and the NM Highway Department. He made his home in Clovis in 1968 and was a longtime member of Our Lady of Guadalupe Catholic Church.   Leo has a great passion for working on cars. He loved sitting in his favorite chair watching his Western shows. He also loved to listen to Spanish Music, and to dance. He was a very loving and caring man who loved to spend time with his children, grandchildren, and great-grandchildren. Those that knew him established a bond with him due to his generous heart. He will be greatly missed by his family and friends.   Leonires is preceded in death by his parents, two sons, Richard Sena and Leo Lopez, three brothers Alfredo Sena, Anastacio A. Sena, Eugene Sena, and three sisters Teresa Gauna, Nora Murphy, and Andrea Caballero.   Survivors include a daughter, Priscilla Ferguson and her husband Rodney of Albuquerque, a son Daniel Rael of Albuquerque, two sisters, Virginia Sena Lucero of Portales, and Esperanza Sena Barela of Clovis. Also surviving are four grandchildren, Dezerae Ferguson, Sharahla Ferguson, Isaiah Ferguson, Neriah Ferguson, two great grandchildren Rayachya Ferguson, Sharahla Shanya Ferguson, along with many nieces, nephews, other relatives and friends.   Visitation hours will be Monday, Feb. 4, 2019 from 1pm to 6pm at the funeral home. The casket will be open at the church from 9am to 10am  Tuesday, prior to the services.   A rosary followed by the Mass of christian burial will be held at 10:00 am Tuesday, February 5, 2019 at St. Anthony Catholic Church in Fort Sumner with Leonires nephew, Father Sotero A. Sena officiating. Cremation will follow the services. Interment will be in the family plot, Fort Sumner Cemetery. Pallbearers will include Naqam Ferguson, Sharahla Ferguson, Elijah Ferguson, Isaiah Ferguson, Brandon Adderton, and Carlos Sena. Honorary bearer will be Stash Sena.   Arrangements are under the direction of Chavez Funeral Home, 830 N. Fifth Street, Fort Sumner, NM. (575) 355-2311. To place an online tribute or sign the guest book, go to, www.chavezfuneralhome.com
To order memorial trees or send flowers to the family in memory of Leonires Sena, please visit our flower store.