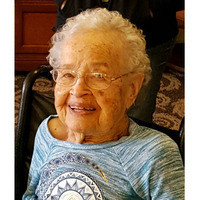 Lorraine Ferguson Lee Runyan went to be with her Heavenly Father on August 18, 2020 at 101 years of age while residing in Clovis, NM. Born April 1, 1919 to Jesse B. and Edna Ferguson in Electra, Texas, she graduated from Electra High School as valedictorian of her senior class. In 1938, Lorraine and Weldon Lee were married in Frederick, OK, and as newlyweds moved to Cut Bank, Montana where Weldon had been transferred with the Texas Pipeline Company and owned the Texaco Service Station and Firestone store for three years prior to marrying Lorraine. During more than half a century in Cut Bank and while raising six daughters, Lorraine graduated from the Famous Artists School and followed in her mother’s footsteps to serve the community through teaching art privately for over forty years. Her legacy lives on through her students, a number of whom went on to further their art education and develop careers in the arts, and through the many homes that are graced with Lorraine’s paintings and hand painted china. In addition to service through art, Lorraine taught and was superintendent of the Presbyterian Sunday School and sang as a member of the choir for many years, was a charter member of the Arts and Crafts Club since 1939, a 4-H leader for thirteen years, both leader and assistant of Girl Scout troops, Mother Advisor of the Order of Rainbow for Girls for six years, and a member of the Rainbow Board. Those six girls of hers were more than a handful, but Lorraine’s high energy allowed her to continue to serve as Past Matron of Eastern Star, and member and Past President of P.E.O, as well. Lorraine and Weldon moved to House, New Mexico in the early 1990’s to be near Lorraine’s mother, where Lorraine was widowed in 1996. Five years later, she married rancher Maurice Runyan, after finally agreeing to take him to a Bridge party. They lived in House and stayed very active, even traveling to Albuquerque, NM to participate in the Senior Olympics, where they won many medals. In early 2013, they moved to Wheatfields Senior Living Community in Clovis, NM, where they enjoyed playing Bridge, dancing and were active in their church. Lorraine will always be our beloved and lovely mother, grandmother, mother-in-law, and friend, and she will be greatly missed by her daughters, Patricia (Jerry) Moyers, Rozanne (Edwin Duane) Dowell, Jenny (Michael) LaSorte, Lisa Lee, and Teri (Scott) Scotton, as well as fourteen grandchildren, thirty-five great-grandchildren, and nineteen great-great-grandchildren. She was preceded in death by her husband, Maurice; daughter, Janet Lee; granddaughter, Amanda Jones; grandsons, Justin Castaneda, Eddie Dowell and Kurt Gratzer; and great granddaughter, Rachel Millhouse. Graveside services and interment were held at 3:00 pm Sunday, August 23, 2020 in the family plot at House Community Cemetery, House, NM with Rev. Sherman Martin officiating. Pallbearers included Greg Dowell, Darren LaSorte, Oscar Lerma, Victor Robbins, Phil Runyan, Scott Scotton, and Danny Tivis. Honorary bearers included Edwin Duane Dowell, and Sherman Martin. A public memorial service will be held at a later date. Please keep Lorraine and her family in your prayers. You may leave a tribute, share a favorite memory, or sign the online guest book at www.chavezfuneralhome.com. The family requests contributions in memory of Lorraine Lee Runyan to Lighthouse Mission, P.O. Box 297, Clovis, NM 88101. Arrangements are under the direction of Chavez Funeral Home of Fort Sumner, NM. (575) 355-2311.
To order memorial trees or send flowers to the family in memory of Lorraine Lee Runyan, please visit our flower store.