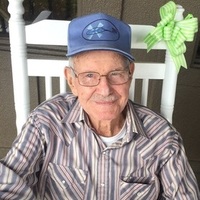 Louis Graciano CdeBaca Jr., 96 a longtime resident of New Kirk, NM passed away on Friday, August 27, 2021 at Heritage Assisted Living Facility in Las Curces, New Mexico. Louis was born September 23, 1924 in Albuquerque, NM the son of Louis and Florentina (Grzelachowski) CdeBaca. He grew up in Las Vegas, Santa Fe, and New Kirk. He attended primary school in Santa Fe, Middle School and High School in Santa Rosa. Louis parents owned a grocery store in New Kirk for many years. Louis worked with his parents at the family store. After graduation from high school he served in the U.S. Navy. Following his honorable discharge, Louis married Anelia Padilla on March 6, 1946 at Nuestra Senora de Refugio Catholic Church in Puerto De Luna, NM. He worked for the Corp of Engineers at Conchas Dam. He and Anelia purchased the CdeBaca family grocery store and operated it for several years until I-40 bypassed New Kirk. At that time they moved to Albuquerque where Louis worked for the NM Motor Vehicle Department. They returned to New Kirk and Louis worked for the NM Department of Transportation where he served as Foreman for many years until his retirement in 1986. Louis also owned and operated a cattle ranch near New Kirk. He was elected and served as Justice of the Peace for several years. Louis made his home in Las Cruces in 2017 following the death of his wife. Louis is preceded in death by his parents, his wife Anelia CdeBaca in 2017, a daughter Gloria CdeBaca in 2009, two sisters Celina Strand and Oma Gallegos, and two brothers Robert CdeBaca and Carlos CdeBaca. Survivors include five children, two daughters Rita Lucero of Coppell, TX, and Linda Martinez of Las Cruces three sons Thomas CdeBaca (Gail) of Albuquerque, Christian CdeBaca (Terry) of Albuquerque, and Joseph CdeBaca (Rosa) of Artesia, NM. Also surviving are 11 grandchildren, 16 great-grandchildren, and 2 great-great grandchildren along with a host of other relatives and many friends. Cremation has taken place. A memorial Rosary and funeral Mass was held at 9:30 am, Friday, September 17, 2021 at Nuestra Senora de Refugio Catholic Church in Puerto De Luna, NM with Father Christopher Bernabe officiating. Interment followed at Nuestra Senora de Refugio Cemetery. Arrangements are under the direction of Chavez Funeral Home, 923 S. Third Street, Santa Rosa, New Mexico. (575) 472-3369.
To order memorial trees or send flowers to the family in memory of Louis G CdeBaca Jr., please visit our flower store.