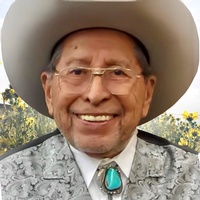 Louis entered this world on November 24, 1926 as the third child of Jose and Luisa Hernandez in Owensmouth (Canoga Park), CA and passed away 91 years later in Beverly Hills, CA on July 15, 2018. He proudly served his country in World War II as a PFC Combat Engineer for the U.S. Army Corp of Engineers and was stationed in the Philippines for one year, ending in October 1946. After returning home from the war, Louis remained in Canoga Park and received his Aero-Mechanics certificate from National Trade Tech College in Glendale, CA. He also worked as a carpenter, remodeling and building homes in the San Fernando Valley. With the help of his brothers and sisters, he then built a grocery store called Louie’s market which his sister Isabel operated for the next 34 years.   In the spirit of making his community a better place to live, Louis represented his neighbors to petition the City of Los Angeles to bring paved streets, side walks and lighting to his local neighborhood. And in 1984, Louis built and owned a community service facility, which was operated by El Centro De Amistad and later by Victory Outreach. In 1955, Louis married “the love of his life”, Odelia Tenorio from Pintada, NM. They raised their four children Louis, Diana, Steve, and Raymond in the West San Fernando Valley. In 1956, after watching a flurry of activity with vehicles and people gathering on Canoga Ave. and Vanowen Blvd., he went to the employment trailer for North American Aviation that was in the process of building a massive rocket engine testing facility, called Rocketdyne, in the nearby Santa Susana mountains. He was hired on the spot and told to jump into a jeep for a drive up to the Santa Susana complex. For the next 44 years, Louis loved testing rocket engines that carried our astronauts to the moon, under the Apollo program, and later to the International Space Station. In 2005, Louis kept his promise to his wife Odelia and moved to Pintada NM, to retire and fulfill his childhood dream of being a cowboy and having a ranch. He loved living in a valley surrounded by majestic mesas and raising cattle, beginning with a calf he named Valentina, which he has received as a gift from a local rancher on Valentine’s Day. Louis is survived by Odelia, his wife of 61 years, and their four children: Louis (Jane) of West Hills, CA, Diana of West Hills, CA, Steve (Dawn) of West Hills, CA, Raymond (Elizabeth) of Simi Valley, CA; the Hernandez grandchildren: Louis, Ana, Michael, Sarah, Katelyn, Haley, Anthony, and Sophia. His three brothers: Mario, Rudolfo and Alexandro. And his four sisters: Conchita Federico, Evangelina Espinosa, Anascillia Ochoa and Sylvia Hernandez. To Louis, life was an adventure to the very end and he made it his personal mission to encourage young people to pursue careers in science and space exploration! There will be services in Canoga Park, CA on Saturday, July 28, 2018 at Our Lady of the Valley Catholic Church, Canoga Park, CA. A rosary will be recited at 9:15am to 9:30am, Viewing: 9:30am to 10:00am. (open casket) followed by the Mass at 10:00am. A Celebration of Life from 11:00 am to 1:00pm in the parish hall. Services in Pintada, NM will be held at Holy Family Catholic Church. On Monday, July 30, 2018 there will be a viewing beginning at 6:30pm followed by a rosary at 7:00pm. On Tuesday, July 31, 2018 Mass will be held at 10:00 am  with interment in Holy Family Cemetery. Father Christopher Bernabe will officiate.  A celebration of Life will follow at the Community Center following the interment. Local arrangements are under the direction of Chavez Funeral Home, 923 S. Third Street, Santa Rosa, New Mexico. (575) 472-3369.
To order memorial trees or send flowers to the family in memory of Louis H. Hernandez, please visit our flower store.