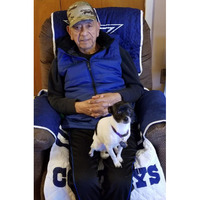 Manuel Luciano “Mannie” Aguilar Sr., age 92 of Vaughn, New Mexico passed away Sunday morning, July 05, 2020 at his home. Mannie was born November 14, 1927 to the home of Cresencio and Remija (Lujan) Aguilar in Pastura, New Mexico. He married Teresa Jaramillo on December 31, 1955 in Hereford, Texas. Mannie served in the U.S. Army from July 2, 1952 until his honorable discharge with the rank of Staff Sergeant on July 3, 1954. He was attached to Battery C, 738th AAA Gun Battalion where he served as an instructor. His military occupation was Antiaircraft Artillery Gun Crewman. His decorations and citations include the National Defense Medal, and Good Conduct Medal. Mannie was an outstanding baseball player growing up. He was scouted by semi-pro minor league teams. He enjoyed hunting, and watching sports. His favorite team were the Dallas Cowboys. Mannie was employed by the AT&SF Railroad as a Crane Operator and Track man. He retired from the railroad after 35 years of service. Mannie was a lifelong Catholic and a member of St. Mary’s Catholic Church in Vaughn. He was a member of the American Legion, and served many years as an Election Judge for local and State elections. Mannie was a loving grandfather and enjoyed spending time with his grandchildren. His pastimes included hunting, ranching, camping, fishing, and visiting relatives. Mannie is preceded I death by his father Crescencio Aguilar in 1946, his mother Remija Aguilar in 1959, a son Manuel Aguilar Jr., in 2000, two brothers Cipio Aguilar in 1972, Petrolino Aguilar in 2006, two sisters Lucy Patterson, and Lena White 2007, and a granddaughter Erin Mata in 1981. Survivors include his wife of 64 years, Teresa Aguilar of the family home in Vaughn, three daughters Charlotte Romero and husband Bob of Lubbock, TX, Colleen CoCo Riojas and her husband Robert of Plainview, TX, Sharon Mata and husband Ed of Albuquerque, one son Andre Aguilar of Belen, NM. Also surviving is a brother Gilbert Aguilar of Fullerton, CA, five grandchildren, grandsons Eddie Mata of Albuquerque, J.R. Romero of Leander, TX, granddaughters Valerie Mata of Albuquerque, Contessa Romero of Lubbock, TX, and Analysa Mata of Greeley, CO, three great-grandchildren Abigayle Mata, Thaddeus Mata, and Makayla Mata all of Albuquerque along with a host of other relatives, many friends and his companion and fur-baby Reyna. Holy Rosary, and funeral Mass were held at 10:00 am Friday, July 10, 2020 at St. Mary's Catholic Church in Vaughn with Father Leonard Paskus officiating. Interment with military honors followed at Evergreen Cemetery. Pallbearers were Carlos Armendariz, Eddie Mata, J.R. Romero, Raymond Garcia, Thaddeus Mata, and Paul Lucero. Honorary bearers were Norbert Archibeque, Paul Madrid, Charles White, Jon Todd Aguilar, Patrick Aguilar, and Peter Aguilar. The Aguilar family regrets that the services were not be open to the public due to the statewide restrictions pertaining to the COVID-19 Virus. In cooperation with the Governor’s order, services are limited to the immediate family only. However, the family does kindly ask that you keep them in your thoughts and prayers. Please leave a note of condolence, a favorite memory, or sign the online guestbook at www.chavezfuneralhome.com All arrangements are under the direction of Chavez Funeral Home, 830 N. Fifth Street, Fort Sumner, New Mexico. (575) 355-2311.
To order memorial trees or send flowers to the family in memory of Manuel Aguilar, please visit our flower store.