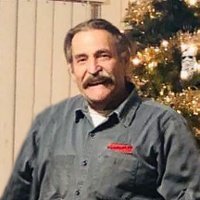 Manuel Sisneros, 65 of Fort Sumner, New Mexico passed away Thursday, June 13, 2019 at Plains Regional Medical Center in Clovis following an illness. His family was at his bedside. Manuel Angel Sisneros was born February 1, 1954 in Vaughn, NM to the home of Napoleon and Josepha (Luna) Sisneros. He grew up and attended schools in Clovis, NM.  Manuel worked for Ortega Plastics in El Paso, TX for a while and later worked at a meat processing plant in Clovis. For the past 19 years he has worked for Loram as a clerk for their railroad maintenance equipment. He spent many years working in the northeast with the Loram rail grinding crew. Manuel served in the U.S. Navy, he was honorably discharged on October 29, 1973. Manuel married Sylvia Castillo on September 21, 2007 in Vaughn, New Mexico. Manuel made his home in Roswell from 2008 until 2016 when he moved to Fort Sumner. He was a member of St. Anthony Catholic Church. He enjoyed being with his grandchildren and always made sure to take them all to a movie. He also enjoyed visiting the casinos and travelling with Sylvia. Manuel is preceded in death by his parents, a brother Joe Sisneros and a sister Mary Frances Sisneros. Survivors include his wife Sylvia Castillo-Sisneros of the home in Fort Sumner, a son Johnny Lucero of Roswell, grandson Diego Pacheco of Fort Sumner, a step son Adino Castillo (Jessica) of Roswell, and a step daughter Rubina Castillo of Vaughn. Three brothers Andy Sisneros  of Vaughn, Ricky Sisneros (Margie) of Clovis, and Robert Sisneros (Liz) of Albuquerque, five sisters Thelma Villa (Eddie) of Clovis, Nora Yodis (Frank) of San Diego, CA, Lisa Apodaca of Clovis, Cynthia Agbulos of Agana Heights, Guam, and Mable Lucero of Clovis. Also surviving are five grandchildren Adino Castillo (Danny) of Roswell, Cruz Castillo (Alani) of Hagerman, Marissa Castillo (Jesse) of Roswell, Reyna Castillo of Roswell, and Azaryiah Rodriguez of Vaughn, NM, two great-grandchildren Zander Lucero of Roswell, and Autumn Castillo of Hagerman along with numerous nieces, nephews, other relatives and many friends. Visitation will take place one hour prior to the rosary and funeral Mass. Rosary devotional services will be held at 7:00 pm Friday, June 14, 2019 at St. Mary's Catholic Church in Vaughn, NM. The funeral Mass of Christian burial will be held at 10:00 am Saturday, June 15, 2019 with Father Leonard Paskus officiating. Burial will follow at Evergreen Cemetery. Pallbearers will include Johnny Lucero, Carlitos Sisneros, Andy Sisneros, Eddie Villa Jr., Adino Castillo II, Cruz Castillo, and Matthew Owens. Honorary bearers will be Diego Pacheco, Marissa Castillo, Reyna Castillo, Azaryiah Rodriguez, Zander Lucero, Autumn Castillo, Anthony Page, and Louis Agbulos III. All arrangements are under the direction of Chavez Funeral Home, 830 N. Fifth Street, Fort Sumner, New Mexico. (575) 355-2311.
To order memorial trees or send flowers to the family in memory of Manuel Sisneros, please visit our flower store.